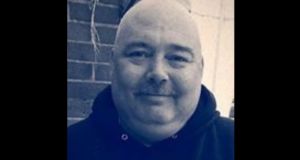 Undated family handout photo issued by Essex Police of Gordon McGhee (52) who was stabbed to death in his flat in August 2018. Photograph: Family Handout/Essex Police/PA Wire

A coin collector accused of stabbing a fellow enthusiast to death to steal his collection had previously been gifted “a couple” of items from it, a court heard.

Prosecutors say Danny Bostock (33) knifed Gordon McGhee in his flat to get the collection, which included limited edition Beatrix Potter 50p pieces, then tried to cause a gas explosion to destroy evidence.

Bostock denies murder and attempted arson being reckless as to whether life would be endangered.

Mr McGhee’s neighbour Melissa McGrory told Ipswich Crown Court that he had previously taken his collection to her flat in Colchester, Essex, where he showed it to Bostock, who was known to them both.

“He said ‘look at this one, look at that one’,” she said. “He was very proud of his collection.”

She said 52-year-old Mr McGhee intended the collection to be a hand-me-down to his daughter.

Bostock, of Berberis Walk, Colchester, was “intrigued” by the collection, she said, adding: “I think he was amazed.”

Mr McGhee told Bostock: “If there’s any there you like, you can have a couple,” Miss McGrory told the trial.

She said Bostock took some of Mr McGhee’s duplicates.

“He seemed very grateful and it made Gordon smile,” she said, adding that it happened in 2018.

Miss McGrory said she found Mr McGhee’s flat unlocked on August 22nd, the day after a group including her, Mr McGhee and Bostock had been drinking together.

“As soon as I opened the door I just smelt gas,” she said, adding that the kitchen hobs were “turned up fall blast” but unlit, so she switched them off and opened some windows.

She then found Mr McGhee’s bloodied body on the floor by his bed, and saw a “dish cloth that had been lit” on the hall floor.

In cross-examination, she agreed with defence barrister Alison Levitt QC that the main door to the block of flats was not secure and “anyone could get in”.