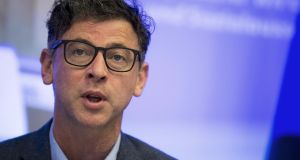 Cillian Lohan has been elected vice-president of the European Economic and Social Committee, on a mandate of reforming the body

Not many people know about the EU’s European Economic and Social Committee (EESC). Neither did Cillian Lohan, before he found himself nominated to be a member of it. Now the Corkman with a background in environmental NGO work has been elected as its vice-president, on a mandate of reforming a body blackened by scandal, nicknamed the “zombie committee”, and facing calls for outright abolition.

“Before I came in I barely knew it existed or what its function was,” Lohan said. “I wish more people knew about it.”

The EESC was established by the European treaties in 1957, with the idea that it would represent the different interest groups of society in EU policy-making. National governments appoint its 329 members. They are chosen to represent one of three groups: employers, workers and “others”, such as NGOs, farmers or consumers. They are charged with forging a consensus opinion to influence EU laws; it is mandatory for the EU institutions to consult the committee on certain subjects.

Somewhere along the line, this plan went wrong. Governments used appointments to reward cronies. “The appointment procedure meant there were a lot of grey-haired old men in suits appointed to the committee. Very few younger people, very few women,” Lohan describes it. “It can look like it’s just a favour or a reward.”

It worked slowly and became increasingly irrelevant, issuing opinions after the policy debate had already moved on. All the while, costs increased, to €142.5 million in 2020. Members are not paid a salary – they are usually either retired or have a job elsewhere – but can claim €290 a day in expenses without needing to provide receipts. This compensation has continued even though meetings are now held over video conference, rather than requiring trips to Brussels. In pre-Covid times, the committee also funded its members’ trips to participate in conferences or events around the world.

The committee got its “zombie” nickname from Czech European People’s Party MEP Tomáš Zdechovský. “It’s a zombie committee that lost its purpose but still lives on,” he told Politico. “Very few lawmakers are reading the opinions of this committee. The impact is close to zero.”

Lohan argues against this. He admits the committee became inward-looking and failed to engage with other EU institutions, but insists it has plenty of clout compared to the environmental NGO sector he’s familiar with.

Calls by members of the European Parliament for the abolition of the committee as an obsolete institution go back more than a decade. But they have increased in volume due to a scandal over a senior Polish member, Jacek Krawczyk.

The business representative is currently being prosecuted by Belgian authorities over longstanding harassment accusations, which he denies. Impervious to the scandal, Krawczyk refused to step down and was recently reappointed by the Polish government to serve a fresh five-year term.

“It’s been damaging on loads of levels, it’s created a morale problem within the staff,” Lohan says of the affair. “It has provoked the need for urgent reform.”

Who are Ireland’s nine members? Representing employers are Peter Byrne, CEO of business organisation South Dublin Chamber, and Mary Doyle of Ibec. For the workers group, Jack O’Connor of the Irish Congress of Trade Unions and Unison’s Patricia McKeown.

I feel really passionately that this could work so well. But it needs engagement

The “others” group is the largest. It’s made up of Lohan, who is CEO of the Green Economy Foundation, John Comer of the Irish Creamery Milk Suppliers Association, Michael McLoughlin of Youth Work Ireland, Séamus Boland of Irish Rural Link, and Joe Healy – the second former president of the Irish Farmers Association in a row to be appointed to the committee.

With its somewhat archaic structure designed to represent societal groups, the committee could be likened to Ireland’s Seanad. Lohan agrees with the comparison, adding that the EESC could also become more effective with fresher faces in it. He sees the group of “others”, in particular, as having great potential to represent Europe’s minorities.

“It’s actually quite similar, because you’ve got really good new members in the Seanad now. They don’t talk crap, and they don’t even look like the image . . . in how they dress or how they speak. That’s what’s been missing in democracy to some extent. Our democratically selected representative don’t look like us, or talk like us. EESC is potentially the home of that in the EU institutions,” Lohan says.

“I feel really passionately that this could work so well. But it needs engagement, and it needs people to understand: here’s a chance for you to say things.”