More bark than bite in Iran’s ban on walking dogs 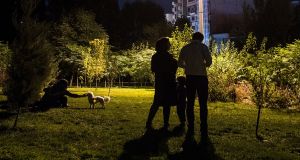 A young couple who can’t afford to buy a dog for their son bring him to a Tehran park park so he can play with dogs there. Photograph: Arash Khamooshi via The New York Times

Wherever Asal Bahrierad goes, her Shih Tzu terrier, Teddy, follows. The 31-year-old Iranian even slept in her car with Teddy for three nights, she said, when visiting with her mother, who does not like dogs. Impressed by her daughter’s determination to be with Teddy, Bahrierad’s mother finally relented and allowed her back in the house, with her beloved dog.

“Now both my mom and I can’t imagine living without Teddy,” Bahrierad said. “No one, not even the police can take him away from me.”

That last statement is a matter of debate these days in Tehran.

Last week Teddy and all other dogs in Iran were front and centre in Iran’s nearly 40-year long battle against western influences when Tehran’s police chief, Brig Gen Hossein Rahimi, announced that the judiciary had banned walking dogs in public.

For good measure, the court also banned having dogs in cars.

In Islam, dogs are considered “najes”, or impure. Guard dogs are tolerated, but keeping them as pets is a step too far. The problem is that many Iranians think otherwise.

Dogs are everywhere in Tehran: German shepherds on leashes in alleyways; Siberian huskies frolicking in the winter snow; and Chihuahuas panting through the open windows of cars, not to speak of the many former street dogs adopted by animal lovers.

Every so often Iranian officials take note of the rising popularity and call for measures to prevent Iranians from normalising the notion that a dog is man’s best friend. Dogs “create fear and anxiety” when they are seen in public, Rahimi said in an appearance at the Young Journalist Club, part of Iranian state television. “The police will take measures against the owners.” He did not say exactly what measures.

His comments were echoed in the semi-official Fars news agency, where people complained that dogs take away all the fun in public parks. “Dog owners ignore the commands of Islam, and influenced by western satellite channels bring their pets to the park causing distress for the other visitors,” one user wrote. “We call upon the authorities to firmly deal with these dogs,” someone else wrote.

Hamidreza Taraghi, a hard-line politician, said in an interview, “Religiously speaking, wherever a dog sits or walks, we cannot pray.”

Taraghi said increasing numbers of people were complaining to police about dogs. Furthermore, he added, dog ownership is adding fuel to the American sanctions effort. “We are experiencing economic difficulties but the dog lovers are spending billions of dollars each year for dog food,” he said. “We need that money for more important things.”

Walking dogs in public is by no means the only activity off-limits to Iranians, as their clerical leaders seek to help the citizenry avoid sin. To achieve this goal, they are prohibited, among other things, from dancing and drinking alcohol and, for women, appearing in public without the compulsory Islamic head scarf.

In reality, however, the give and take between Iranians and their Islamic guardians is a constant work in progress. So there is dancing, some people drink and headscarves tend to fall off with surprising frequency. But punishments can be harsh, and every so often perpetrators are fined, and at times even flogged.

Nevertheless, flouting the official rules is so routine that few people consider it an act of rebellion. Time was in Iran that religious hard-liners would inform on violators. These days, the enforcement of unpopular laws is left almost entirely to the police, with neighbours, friends and others determined to look the other way.

Like many previous edicts of this sort, the ban on dog walking is not being taken very seriously, Bahrierad said. “Teddy and I walk in a park in the Shahram neighbourhood everyday, and the police are actually very friendly to us,” she said.

The number of dogs – and cats, though they are more acceptable under Islam – is growing rapidly, if a recent explosion in pet clinics in Tehran is any measure. Two decades ago the only place to take a pet for treatment was Tehran University, which ran a clinic staffed by veterinarians in training. Now, there are dozens of pet clinics.

Still, dog owners need to learn some things, said Damoon Ansari, a veterinarian at the Paytakht Pet Clinic in Tehran’s Shahrak-e Gharb neighbourhood. “We need to educate dog-owners,” he said. “They should have rights, but also responsibilities.”

Larger dogs need training, droppings need to be scooped, and children should be taught how to deal with animals and dogs, he explained. And when it comes to dog-walking there is no middle way, he said. “Dogs need to walk outside. Period.”

Near the Imam Khomeini International Airport on Thursday, Hoda Sedghi Shamir (37) was busy feeding the 23 dogs she is sheltering. Some are paralysed, others are blind, most are strays that she found roaming around. “I never had children, so these are my kids,” she said.

Shamir said she has helped dogs hurt when stones were thrown at them, and others shot by air rifles. “I spend around $600 (€525) a month on all of them, for their food, vaccinations and training sessions,” she said.

As for the ban on dog walking, Shamir shrugged and said this, too, will pass. “For a while we have to lay low, but then the rule will again be forgotten,” she said. – New York Times