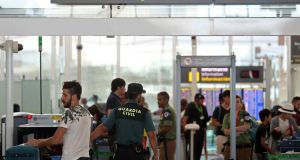 Spanish police have smashed a human trafficking network that smuggled people from China into Britain and Ireland.

A total of 155 people were arrested during a three-year investigation, most of them Chinese, the Spanish National Police reported.

Police raided three properties in Barcelona on Tuesday, arresting four people and seizing documents, computers and telephones, as well as cash in euros and yen.

The victims of the ring paid a €20,000 fee in exchange for which they were promised the necessary documents and help to reach their final destination. Most of those travelling were trying to reach the UK and a small percentage were heading to Ireland.

The charges against those arrested include falsifying documents and membership of a criminal gang.

The investigation began after Spanish authorities were alerted to a sudden rise in the number of false documents being used by Chinese citizens attempting to fly out of Barcelona’s El Prat airport.

Investigators found that after paying the fee, victims of the trafficking ring were flown to Spain, where they were kept in apartments around Barcelona until false documents were ready for them to travel to the Republic or the UK.

The documents were forged in China, then sent to Spain via courier services. Once the papers arrived, low-cost air tickets to the UK or Ireland were then purchased, often just hours before the flight departed in order to avoid raising the suspicions of the police.

The police said that the testimonies of five migrants who had been detained were key in breaking up the ring.

The Spanish police said the trafficking ring was “extremely secretive, structured and hierarchical” and that its members operated in countries other than Spain and China.

“The organisation adapted continually to new situations and would open up new routes and procedures, according to previous successes and failures,” the police said.

Many of those involved in the ring were used to accompany the people being trafficked and help ensure they reached their destination. Others, described by the police as “teachers”, instructed those travelling and taught them rudimentary English phrases to help them avoid detection.