Who was Qassem Suleimani? Iran farm boy who became more powerful than a president 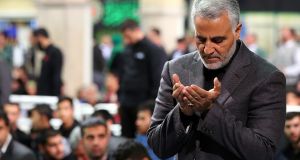 Qassem Suleimani prays during a religious ceremony in Tehran in 2015. Photograph: EPA

US drone strikes in Baghdad on Friday morning have killed not just one of the most influential men in Iran but also in Syria, Lebanon and Iraq, too.

Qassem Suleimani had become well known among Iranians in past years and was sometimes discussed as a future president. Yet the leader of the Revolutionary Guards’ Quds force was still a relatively obscure figure outside a region that he may have done more than anyone to reshape.

“He was more important than the president, spoke to all factions in Iran, had a direct line to the supreme leader and was in charge of Iran’s regional policy,” said Dina Esfandiary, a fellow at the Century Foundation think tank. “It doesn’t get more important and influential than that.”

The shadowy Quds force are tasked with spreading Iran’s influence abroad and, in the past two decades, Suleimani (62) had extraordinary success in doing so. In the chaos and death that followed the 2003 US-led invasion of Iraq and the 2011 Syrian revolution, Suleimani saw opportunity, pouring in men and money to build a crescent of pro-Iran forces stretching across the region from Lebanon in the west to Yemen in the south.

The continued rise of Hizbullah, the most powerful armed force in Lebanon; Iran’s decisive intervention to prop up Bashar al-Assad in Syria’s civil war; the ongoing resistance of Yemen’s Houthi militias to Saudi Arabian-led forces, and the ascendance of Shia militias in Iraq: each of these developments can be traced back in some measure to the short, grey-haired Iranian commander born to a poor farming family in 1957.

Suleimani wrote in his autobiography that he was born in Rabor, a city in eastern Iran, and was forced to travel to a neighbouring city at age 13 and work to pay his father’s debts to the government of the Shah. By the time the monarch fell in 1979, Suleimani was committed to the clerical rule of Ayatollah Ruhollah Khomeini, and joined the Revolutionary Guards, the paramilitary force established to prevent a coup against the newly declared Islamic Republic.

Within two years, he was sent to the front to fight in the war against the invading Iraqi army. He quickly distinguished himself, especially for daring reconnaissance missions behind Iraqi lines, and was appointed the head of a brigade. He was wounded at least once and lost many men, but never his taste for conflict. The war also gave him his first contact with foreign militias of the kind he would wield to devastating effect in the decades to come.

By the the time the Iraq government fell in 2003, Suleimani was the head of the Quds force and blamed for sponsoring the Shia militias who (along with their Sunni militant opponents) killed thousands of civilian Iraqis and coalition troops. As fighting raged on Iraq’s streets, Suleimani fought a shadow war with the US for leverage over the new Iraqi leadership.

A message he passed in 2007 to American commander David Petraeus has become notorious. “General Petraeus,” it read, “you should know that I, Qassem Suleimani, control the policy for Iran with respect to Iraq, Lebanon, Gaza, and Afghanistan. The ambassador in Baghdad is a Quds force member. The individual who’s going to replace him is a Quds force member.” (Petraeus, in a 2008 letter to the then-US defence secretary, described Suleimani as “a truly evil figure”.)

A recent leak of diplomatic cables showed the extent of Suleimani’s influence in Iraq: helping lead a battle against Islamic State, coercing a then-transport minister to allow Iranian planes to overfly Iraq with weapons bound for Syria, and spending regular time with government officials.

Suleimani had been instrumental in crushing street protests in Iran in 2009. Outbreaks of popular dissent in Lebanon, Iraq and Iran in recent months were again putting pressure on the crescent of influence he had spent the past two decades building. Violent crackdowns on the protests in Baghdad were blamed on militias under his influence. He was no longer operating in the shadows.

Eighteen months before his death, Suleimani had issued Donald Trump a public warning that may prove correct, though not in the way he may have intended. “Mr Trump the gambler, I’m telling you, know that we are close to you in that place you don’t think we are,” he said, wagging his finger and dressed in olive fatigues.

“You will start the war but we will end it.” – Guardian