Spain expresses concern to US over attacks on colonial-linked statues

Monuments to Columbus, Cervantes and others defaced in wake of George Floyd death 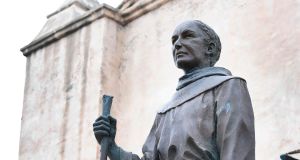 A statue of Father Junipero Serra in front of the San Gabriel Mission in San Gabriel, California. A statue of Serra in nearby Golden Gate Park was torn down by protesters last Friday. Photograph: Frederic J. Brown/AFP/via Getty Images

A spate of attacks on statues linked to colonialism and slavery in the United States has caused alarm in Madrid, following the vandalising of several monuments depicting prominent figures from Spain’s past.

A statue of the explorer Christopher Columbus was toppled in the US city of Richmond earlier this month, following a demonstration in favour of indigenous rights. It was then set on fire and thrown in a lake. Another statue of the Italian, who is known for his voyage to the New World in 1492 on behalf of the Spanish crown, was decapitated in Boston.

A statue of St Junípero Serra, a Spanish Franciscan cleric, was pulled down in a park in San Francisco last Friday and daubed with red paint. Serra established missions across California although critics say he symbolised Spanish subjugation of native peoples.

The acts have been part of a wider backlash across the United States and elsewhere against historical figures linked to slavery and colonialism triggered by the killing of an African-American, George Floyd, by a white policeman in Minneapolis on May 25th.

The Spanish government has contacted US authorities to express concern at the spate of monument attacks linked to its own past. Foreign minister Arancha González said that her department had contacted federal, state and local authorities to highlight “the importance that we attach to this shared history with the United States”.

Ms González added that she and the Spanish government “share a great deal” with the anti-racist Black Lives Matter movement but called for a greater understanding of Spain’s contribution to US history.

In a tweet, the Spanish culture minister, José Manuel Rodríguez Uribes, described such defacements as “puerile, simplistic and dogmatic revisionism”.

The defacement of a statue of 17th century writer Miguel de Cervantes, also last weekend in San Francisco, has suggested that the attacks on statues have gone beyond historical considerations. A bust of Cervantes and statues of his literary creations Don Quixote and Sancho Panza were splashed with red paint. Cervantes, Spain’s most celebrated author, is not regarded as a colonial figure.

The Hispanic Council, an organisation that promotes Hispanic culture in the United States described the vandalising of the Cervantes statue as “complete nonsense”.

However, Spain has seen some similar incidents of its own. A statue of St Junípero in Palma de Mallorca has been daubed with the word “Racist” since the current wave of protests began in the United States, and, this week a bag was placed over its head.

Barcelona city hall has so far rejected calls from some groups that it should take down a large statue of Columbus. However, in 2018, the city’s leftist government did remove a statue of Antonio López, an aristocrat who amassed a fortune based on slavery in Cuba in the 19th century.