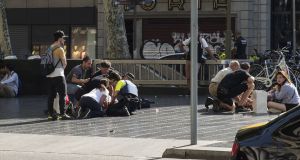 People help injured persons after a van ploughs into a crowd, killing at least 13 people and injuring around 100 others in Barcelona on Thursday. Photograph: Getty

The horrific events in Barcelona and across Catalonia, which saw 13 killed in a van attack, and then five suspected terrorists shot dead in a second incident on the coast, appear to have begun the night before in a small town 200km south of Barcelona.

An explosion at a house in the tiny town of Alcanar, 200km south of Barcelona, and the southernmost point of Catalonia, kills one person and wounds at least one other.

Senior police official Josep Lluis Trapero says the blast was related to the van attack in Barcelona, and that those in the house were attempting to “prepare an explosive device”.

Police say the blast is the result of an accumulation of gas, but do not release further details. Firefighters and police officers are caught by a second blast while investigating the initial explosion.

A white Fiat van veers off the road and into a crowd outside the Plaça de Catalunya metro station, killing 13 people and injuring about 100.

The driver continues down the pedestrian boulevard of Las Ramblas, a popular tourist destination, for more than 500 metres before stopping and fleeing on foot.

The smashed van is left at the foot of a mosaic by artist Joan Miro.

In the town of Vic, 80km north of Barcelona, police find a second van, presumed to be a getaway vehicle.

Police say the van was hired at the same time as the Fiat used in the attack. The driver and perpetrator of the Las Ramblas attack remains on the run.

A man is shot dead by police after he attempts to drive through a police roadblock in the town of Sant Just Desvern, on the outskirts of Barcelona.

A police official says there is no evidence the man was connected to the attack in Las Ramblas, and that it is being treated as a separate incident.

Catalan police say two of their officers were knocked down by the car, before opening fire. The town is 5km from the Camp Nou, the stadium of FC Barcelona and is known as the residence of several famous footballers.

Police confirm one suspect, Driss Oukabir, has been arrested after turning himself in.

The 28-year old Moroccan-born Spanish resident is identified from documents left at the scene. But Oukabir says his passport and ID were stolen, and that he played no part in the attack.

Oukabir is arrested in the northern Catalan town of Ripoll, 110km from Barcelona. He tells police he came forward after he saw his name and image being circulated in the media.

Newspaper El Pais says Oukabir, or someone with his ID, rented the Fiat van used in the attack.

A second unnamed suspect is confirmed as arrested, according to Catalonia?s regional president, Carles Puigdemont.

According to police official Josep Lluis Trapero, the second man was born in the Spanish territory of Melilla in northern Morocco, and was arrested in Alcanar, the site of Wednesday?s house explosion.

Police kill five alleged terrorists after they commit a second attack in the coastal town of Cambrils, 120km south of Barcelona. Police say the attackers drove an Audi A3 car into pedestrians, killing one and injuring six.

Reports suggest the attackers were wearing what appeared to be explosive belts although these turned out to be fake.

Police say they are seeking Moussa Oukabir as the suspected driver of the van that killed 13 people in Las Ramblas.