In the mainly Republican state, some believe liberalism may finally be gaining a foothold 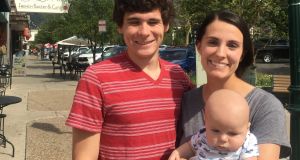 In the 11th part of her series “Coast to Coast: Travels in Trump’s America”, Washington Correspondent Suzanne Lynch visits the city of Provo in the mainly Mormon state of Utah

In the small city of Provo, 70km south of Salt Lake City, posters of election candidates are fluttering in the breeze.

It’s a few days before the Republican primaries in this district of eastern Utah. In May, local congressman Jason Chaffetz unexpectedly announced his retirement from Congress – he has since joined Fox News. The election to fill his seat takes place in November and Republicans picked their candidate this week.

Politically, Utah is an intriguing state. While it stretches from the vast desolate red canyons that sweep across the south-east of the state to the Wasatch mountains in the west, most of its three million residents live in Salt Lake City and its environs.

The Trump victory quelled many liberal hopes that 2016 might become the year that Utah backed a non-Republican president for the first time in half a century.

While evangelical Christians across the country ultimately threw their support behind Trump, the Mormons – members of the Church of Jesus Christ of Latter-day Saints – were less sure.

From the early days of Trump’s candidacy Mormon leaders expressed uneasiness with the Republican Party candidate.

Much of this reflected disquiet about Trump’s immigration policy. Mormons have been the target of persecution throughout their history. Their leader, Brigham Young, and his followers moved west to Utah in 1847 after being effectively driven out of states such as Missouri and Iowa. Utah’s current governor Gary Herbert, a Mormon, was an early critic of Trump, rescinding his support for the presidential nominee in October when a video emerged of him boasting of his exploits with women.

The 2012 Republican presidential candidate Mitt Romney, also a devout member of the Church of Jesus Christ of Latter-day Saints, was one of the harshest Republican Trump critics during the campaign, describing the New York businessman as a “phoney” and a “fraud”, though he later backed him and became a potential candidate for secretary of state.

Nine months on from the vote that propelled Donald Trump to power, the town of Provo in Utah’s third congressional district is back in election mode. As with the handful of special elections taking place across the United States this year to fill congressional seats, this election is being viewed as an early referendum on the Trump presidency.

The election here has exposed growing divisions within the Republicans about how best to handle Donald Trump and about the future direction of the party.

Provo mayor John Curtis, who won the Republican primary on Tuesday, did not vote for Trump in the election, though he spent much of the primary campaign trying to downplay this in a bid to court conservative voters. As the most liberal of the three candidates, he was also the target of up to $800,000 in campaign money spent by out-of-town groups eager to paint him negatively as a left-winger.

As I walk along the pretty streets of Provo, overlooked by the stunning Wasatch mountain range, most people in this area seem to be happy with the state of the country. Utah has the lowest rate of income equality in the country and crime is low.

As is the case with Salt Lake City, Provo is well-kept, peaceful – and overwhelmingly white. Smiling, well-groomed families stroll along with babies in prams, stopping for ice-cream or coffee, the epitome of the family-centred ethos of the Mormon religion.

Across from the temple on the main street of Provo I meet local resident Louise Baird. An 84-year-old Mormon, originally from Salt Lake City, she raised 11 children. Although she is a lifelong Republican, she says she has concerns about Donald Trump and believes too many Republicans are dismissive of any form of state intervention.

“I think the state has a role to play in helping people. For example, one of our children was born with severe mental disabilities and has effectively been a ward of the state. We couldn’t have coped without that help,” she says.

She is a strong supporter of mayor John Curtis, and criticises some of the ads on TV that have sought to paint him as a left-wing liberal. While she believes he will win in November, she says she is also impressed by the Democratic candidate, Kathie Allen, a doctor.

David and Jerianne are young Provo residents. Both are students at Brigham Young University in the town, and are studying public relations and nursing respectively. They have a baby, Benjamin, live in the town and are Mormon. While Jerianne says she does not take too much of an interest in politics, David says he tends to vote Republican and voted for Donald Trump last November.

Like many Republicans, he says he feels a little uncomfortable about the president’s incessant tweeting, but is generally positive about the administration’s performance. “I think people maybe need to give him a bit more of a chance. Some of his statements and tweets are problematic, but he is our president, and I think people need to have some respect for the presidency.”

Further north, in Salt Lake City, the vibe is slightly different. Like many of America’s state capitals, Utah’s largest town has a strong liberal ethos. Its mayor, Jackie Biskupski, elected in 2015, is gay, and the city has a vibrant LGBT community.

While the city is dominated by the huge Mormon temple in the 10-acre Temple Square in the city, it is also replete with hipster restaurants and cafes.

Greg Schultz is a Salt Lake City resident who has been actively involved in Democratic politics. After a successful career in Exxon Mobil, he moved to Salt Lake City with his husband.

The Trump campaign and presidency propelled his activism in local politics. While the electoral districting means it is virtually impossible for a Democratic candidate to be elected to Congress, he believes there are other ways to harness the liberal vote.

“One of the movements that has been under way here is to encourage Democrats to register as Republicans in the primary to help ensure that a more centrist Republican is elected,” he says. “This has happened to an extent with the John Curtis vote in the Republican primary this month, for example.”

In the meantime, many of the young liberals who have chosen Salt Lake City as their home are content with life in this rural state, confident that change is ahead. But despite the Mormon community’s emergence as something of a champion for Trump-sceptics ahead of last year’s election, ultimately – as one local Democrat points out to me – most of them voted for Trump.

“Really, when it came to it, their dislike for Hillary Clinton outweighed their distaste for Trump and they voted Republican. It will take a lot for conservatives in this state to ever fully back a Democratic presidential candidate.”