14 dead; 130 injured as police say terrorists had planned to carry out ‘bigger attacks’ 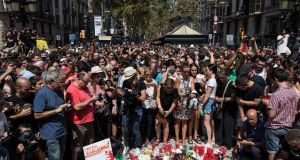 People gather around tributes laid on Las Ramblas after a one minute’s silence for the victims of Thursday’s terrorist attack. Photograph: Carl Court/Getty Images 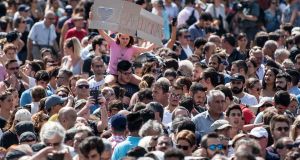 A girl holds up a banner as people gather in Placa de Catalunya to observe a one minute’s silence for the victims of Thursday’s terrorist attack. Photograph: Carl Court/Getty Images

The driver of the van that ploughed into crowds in Barcelona on Thursday, killing 13 people, was one of five men shot dead by police in the seaside resort of Cambrils hours later, a union official for Spain’s Civil Guard told the Associated Press.

The driver abandoned the van and fled on Thursday after speeding along a pedestrianised section of Las Ramblas, the most famous boulevard in Barcelona, leaving a trail of dead and injured among the crowds of tourists and local residents thronging the street.

Investigators believe teenager Moussa Oukabir (17) was behind the wheel of the van which ploughed into tourists in Barcelona’s city centre on Thursday, killing at least 13 and injuring 100.

He is suspected of using his brother’s documents to rent the van.

His older brother, Driss Oukabir, is reported to be one of those arrested following the attack.

According to French media, police are also looking for a white Kangoo vehicle which is believed to have been rented by the suspects and could have crossed the border into France.

Police had issued the names of four suspects that they were searching for, including Oukabir, early on Friday. However media reports on Friday evening said three of the four had been killed in Cambrils. It is now unclear if there are still any suspects at large.

The attacks killed 14 people, including a Spanish woman in Cambrils, with 130 injured. Some 34 nationalities were among almost those killed and injured in the Barcelona attack on Thursday afternoon and in Cambrils, a seaside town, early on Friday morning.

What we know so far:

-Three of the arrested are Morrocan citizens, one is Spanish

The terrorists were even preparing bigger atrocities than those they carried out, police said on Friday.

Hours after the van rampage, police shot dead five people in the Catalan resort of Cambrils, 120 km (75 miles) down the coast from Barcelona, after they drove their car at pedestrians and police officers.

The five assailants had an axe and knives in their car and wore fake explosive belts, police said. A single police officer shot four of the men, Mr Trapero said.

Mr Trapero said the investigation was focusing on a house in Alcanar, southwest of Barcelona, which was razed by an explosion shortly before midnight on Wednesday.

Police believe the house was being used to plan one or several large-scale attacks in Barcelona, possibly using a large number of butane gas canisters stored there. However, the apparently accidental explosion at the house forced the conspirators to scale down their plans and to hurriedly carry out more “rudimentary” attacks, Trapero said.“The explosion in Alcanar at least avoided some of the material they were counting on to carry out even bigger attacks than the ones that happened,” he said. One person was killed in the explosion, police said.

Four men, including Driss Oukabirare, brother to the teenage van driver, are in custody. They are aged 21, 27, 28 and 34. Three are Moroccan and one Spanish, and police said none of them were previously known to the security services for terror-related reasons.

A judicial source said investigators believed a cell of at least eight people, possibly 12, may have been involved in the Barcelona attack and Cambrils plot and that it was planning to use gas canisters.

On Las Ramblas on Friday, residents and tourists trickled back to the famous promenade where hours earlier a white van had zigzagged at high speed through pedestrians and cyclists. Some areas remained cordoned off by police.

At noon local time (11am Irish time) hundreds of people marched through the heart of Barcelona in a defiant show of solidarity against the attacks. Crowds gathered for a minute’s silence in the Placa de Catalunya at noon before parading down Las Ramblas’ tree-lined walkways nearby.

As a minute’s silence came to an end, the shouts of “No tinc por!” (I am not afraid) rang out across Barcelona’s Placa de Catalunya.

The number of people injured in the attacks has risen to 130, Reuters reports citing an emergency services spokesman.

Seventeen were in a critical condition and another 30 were in a serious condition, the spokesman said.

Emergency services said in a statement that the dead and injured in the two attacks were of 34 different nationalities.

Regional head Carles Puigdemont said people had been flocking to hospitals in Barcelona to give blood.

“Those that live here can’t believe it, because we live here, we walk here, this is our neighbourhood,” Sebastiano Palumbo (47), an Italian architect working in Barcelona, said as he walked his dog. “I think the best thing would be to continue, every day, doing what do.”

Islamic State said the perpetrators had been responding to its call for action by carrying out Thursday’s rampage along Barcelona’s most famous avenue, Las Ramblas, which was thronged with holiday-makers enjoying an afternoon stroll at the peak of the tourist season. Bodies, many motionless, were left strewn across the avenue and authorities said the toll of dead, which included several children, could rise.

In an echo of the London Bridge attack in June, Catalonia president Carles Puigdemont said the five terrorists in the Cambrils car were wearing fake suicide belts when they were stopped. Police revealed that an axe and knives were also found in the vehicle, with one of the latter used to wound one person in the face before the terrorists were gunned down.

Four members of an Irish family were among the people injured in the attack, the Department of Foreign Affairs said.

The mother and father are originally from the Philippines and are naturalised Irish citizens, while their two children were both born in Ireland.

The father of the family was hit on the side and may need an operation, but his injuries are not life threatening, Dr Emmanuel Fernandez, consul general of the embassy of the Philippines in Madrid, told RTÉ. He also suffered leg injuries.

One of the children, a 5-year-old boy, is understood to have suffered a broken femur.

Islamic State’s Amaq news agency said the attackers had carried out the operation “in response to calls for targeting coalition states” - a reference to a US-led coalition against the Sunni militant group. Spain has several hundred soldiers in Iraq training local forces in the fight against Islamic State.

There was no immediate indication though that Islamic State had directed or organised the attack, although some of those responsible for similar attacks in Europe have been inspired by the group.

The Barcelona attack was the deadliest in Spain since March 2004, when Islamist militants placed bombs on commuter trains in Madrid, killing 191 people and wounding more than 1,800.

Spanish prime minister Mariano Rajoy announced three days of official mourning for what he called a “jihadist attack” while the Spanish royal household said on Twitter: “They are murderers, nothing more than criminals who are not going to terrorise us. All of Spain is Barcelona.”

President Michael D Higgins said the solidarity of the Irish people was with those in Barcelona and offered his condolences to the Spanish ambassador to Ireland.

US president Donald Trump said: “The United States condemns the terror attack in Barcelona, Spain, and will do whatever is necessary to help.”

The incident took place at the height of the tourist season in Barcelona, which is one of Europe’s top travel destinations with at least 11 million visitors a year.

However, Polish interior minister Mariusz Blaszczak said the attack showed the European Union’s system of migrant relocation was wrong. “It is dangerous. Europe should wake up,” he said. “We are dealing here with a clash of civilisations.”

Authorities in Vic, a small town outside Barcelona, said a van had been found there in connection with the attack. Spanish media had said that a second van was hired as a getaway vehicle.