Spain attacks: How terror and bloodshed unfolded in Catalonia 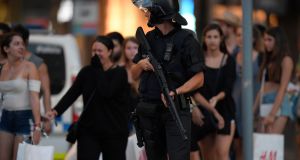 What appears to be the first jihadist terrorist attack in Spain since the 2004 Madrid train bombings was carried out in two separate locations on Catalonia’s Mediterranean coast and over the course of several hours. Here is how the events that began on Thursday afternoon unfolded.

A white Fiat van, driving along Pelayo street, reaches the corner of the Plaça de Catalunya square and veers right, on to the Ramblas boulevard. A kilometre-long pedestrianised walkway which ends at the Mediterranean, the Ramblas is a particular draw for tourists, who wander down it in droves, particularly in the summer months. The vehicle accelerates, zigzagging as it goes and ploughs into dozens of people.

People take cover in shops, bars and restaurants, as many business owners pull down the metal shutters of their establishments until the chaos has subsided.

About 500 metres down the Ramblas, the van stops and the driver, apparently unarmed, gets out and flees. The civil guard later issues a statement saying that it is looking for an individual who is “1.70m in height, wearing white clothes with blue stripes”.

Bodies are left strewn across the Ramblas. In the confusion, some people have been separated from their families and friends, like Jared Tucker, a 42-year-old American, whose wife, Heidi, could not find him in the aftermath of the attack.

Many of those killed are believed to be foreign visitors, with three Germans and a Belgian among the first confirmed victims. Portuguese and Italians are also reported to be among the dead.

The youngest victim is a three-year-old boy from the Catalan town of Rubí who died with his uncle, Francisco López Rodríguez, according to reports. A seven-year-old Australian boy, Julian Cadman, who had been walking along the Ramblas with his mother, is reported missing.

The emergency services react rapidly, with ambulances and police arriving on the scene within minutes.

Initially the authorities confirm only one death, but by Friday there are officially 13 victims and over 100 injured from the Ramblas attack.

Two hours later, the Catalan police confirm that it was indeed a terrorist act and that the corresponding security protocol has been triggered. Prime minister Mariano Rajoy tweets that the “terrorists will never defeat a united people who love freedom in the face of barbarity”.

Confused reports also emerge of one or two people taking hostages in a restaurant off the Ramblas, but eventually the authorities deny this is the case.

Meanwhile, two arrests are made.

The first is Driss Oukabir, a Moroccan in his late 20s, who travelled to Barcelona from his native country on the Sunday before the attack. He is detained in the Catalan town of Ripoll after he is identified as being the person who rented the van used for the attack in the town of Santa Perpètua de Mogoda, near Barcelona. Local media reports that police found a Spanish passport inside the van.

The second detainee is arrested at 9pm in the Catalan town of Alcanar and he is reported as being from Melilla, a Spanish city on the north African coast. He is linked to a gas explosion on a property in Alcanar in the early hours of Thursday morning in which one person died and at least another was injured, as the building collapsed.

Initially, the police had believed that the property had been used as an illicit drugs laboratory. But the head of the Catalan police, Josep Lluís Trapero, now reports that investigators believe “there is a clear connection” between the van attack and the house where the explosion took place.

A second, abandoned, van is found in the nearby town of Vic, whose mayor, Anna Erra, says the vehicle could be linked to the attack.

In the early evening, Islamic State takes responsibility for the attack via its Amaq news agency, but that claim has yet to be verified.

By that time, the Ramblas and Plaça de Catalunya have been evacuated and several metro and train stations in the city centre are closed. At a police checkpoint on Diagonal, a major road cutting through central Barcelona, a Ford Focus fails to stop, striking a police officer, who is slightly injured in the leg. Another officer opens fire on the driver, who is then found dead in the vehicle.

Police say this is not linked to the other attack, but the Catalan government later contradicts this, saying the man found in the car died of knife wounds and that the incident could have a connection to the Ramblas van.

Police say that they have just carried out an operation against “a possible terrorist attack” in the coastal town of Cambrils, 120km southwest of Barcelona.

Five men drive through the town in an Audi, deliberately hitting pedestrians. Seven people are hurt, including a police officer. A police patrol intercepts the rampaging car and shoots four of the men dead. The fifth man dies later from his gunshot wounds. Some of the men had been wearing what appear to be vests loaded with explosives, although El País reports that they are fake.

One of the injured pedestrians later dies in hospital, bringing the overall death toll from the two attacks to 14.

By the next day, people are going about their business on the Ramblas again, although flowers and candles have been put out to commemorate those killed. At midday a minute’s silence is observed in the Plaça de Catalunya, where King Felipe, Rajoy and other political leaders gather.

The Catalan police confirm they have made two further arrests, bringing the total to four. Police chief Trapero says that none of the quartet – three Moroccans and a Spaniard – has a terrorism-related criminal record. However, the whereabouts of the driver of the Ramblas van are still not clear, amid some reports that he was killed by police in Cambrils.

Spanish media says that the police believe him to be Moussa Oukabir, the teenage brother of Driss Oukabir, who rented the vehicle. The photos of three other suspects are also released.

Trapero also reveals that the terrorists appeared to be plotting a bigger attack, possibly using butane gas – but the explosion in the property in Alcanar may have thwarted their original plan.