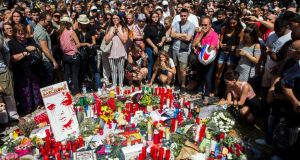 People pay tribute on Friday, outside the Liceu theatre in Barcelona, to victims of Thursday’s attack. Photograph: Quique Garcia/EPA

It’s a cliche, simply because it’s important truth, that one’s first thoughts about a terrorist act should always be with the victims, to make some effort to imagine their plight.

For anyone even slightly familiar with Barcelona, the location of Thursday’s attack is terrifyingly easy to picture. A stroll from the Plaza de Catalunya down the broad expanse of the Ramblas, past the gastronomic cornucopia of Boquería market and the exquisite modernist frontage of the Palau de la Música Catalana is many people’s definitive experience of the city.

And therefore, one supposes, a suitably iconic target for terrorists inspired by the so-called Islamic State.

So this weekend, like so many familiar and unfamiliar places from Paris to Kabul, we have to imagine it stained with innocent blood.

However, as we know all too well in Ireland, it does not take long for empathy with the victims of terrorism to morph into political blame games, perverting the essential task of understanding what exactly happened, why, and whether it could have been prevented.

This pattern has already emerged, albeit in muted form, in Barcelona.

This is hardly surprising, because the timing and location of the massacre puts direct pressure on the major political fault line in Spain today: the movement for the total independence of Catalonia. Did the attackers realise this? That’s still unclear, but the fact this was a large unit carrying out several attacks, and not a lone wolf, suggests a degree of political awareness.

So they probably knew that the Catalan autonomous government plans a highly controversial independence referendum in October. The Spanish government regards this poll as unconstitutional, and wants to prevent it.

Disturbingly, the Catalan government says it will unilaterally declare independence if a majority votes in favour, even if participation is low, as seems very likely. This means that any such majority would only represent a minority of Catalan citizens, hardly a democratic mandate.

So, with relations between Madrid and Barcelona on the floor, the response to Thursday’s terrorist attacks by the two governments has been very closely watched by the Spanish – and Catalan – media.

For the first 20 hours after the attack, they reported the extraordinary spectacle of the Spanish prime minister, Mariano Rajoy, and the Catalan president, Carles Puigdemont, both presiding over separate crisis committees in the same city.

Each claimed that they were co-ordinating perfectly, but their failure to sit in the same room spoke volumes.

It would be wrong to say that either leader is actively playing politics with terrorism on this occasion, though Rajoy and his right-wing Partido Popular were convincingly accused of this repugnant tactic following the Islamist train bombings in Madrid in 2004. They attempted to blame the Basque terrorist group ETA, against all the evidence. The electorate knew better, and voted them out of office.

But it’s equally true that neither leader has forgotten their own political agendas at a moment of extreme crisis and human suffering.

Rajoy’s early and pointed references to the importance of the institutional “unity of Spain” were heavily loaded in the current context. And Puigdemont’s loud insistence, hours after the killings, that the attacks would not slow momentum towards independence seemed indecent.

The fraught relationship between the Spanish interior ministry and the Catalan police force was also highlighted: a clash over whether bollards should have been installed on the Ramblas to prevent vehicle attacks, as proposed by the former a year ago, and rejected by the latter.

Everybody knows, however, that much worse things might have been said, and by yesterday afternoon a joint meeting between the two estranged leaders had finally been agreed. It’s much too early to say, but it could even be that a fresh sense of common cause may emerge from these terrible events.

Certainly, both governments need to reflect deeply on their relations with their two million Muslim citizens, and an historic love-hate relationship with the Arab world. And both administrations will need help from the European Union to cope with a migration crisis that grows more acute by the day. This crisis is not the cause of terrorism, but it will feed the terrorist movement unless it is much more humanely handled.

Spain should remember more clearly that the great Islamic civilisation al-Andalus, which flourished for seven centuries, has left a uniquely rich heritage, which ought to foster mutual understanding.

The Spanish language is rich in Arabic loan words. Some of the greatest architectural monuments in Spain are gifts of Islamic culture. And there can’t be very many Spaniards, even today, without a significant slice of Arab DNA.

Yet the historical narrative that created the Spanish nation, still propagated in some quarters today, draws heavily on the poisonous and fictitious notion of a land peopled exclusively by “pure-blooded” Christians.

Meanwhile, in recent decades, Spain has both needed and resented the labour of Maghrebi immigrants. This was vividly demonstrated in 2000, with a vicious anti-Arab pogrom in El Ejido, an area whose affluence depended on a poorly-paid Arab workforce enduring brutal conditions.

All this makes Spain a prime target for “reconquest” in the equally false and toxic historical narrative propagated by Islamic State. While there had been no major terrorist attacks in the country since 2004, radicalisation has continued. Police arrests suggest that, for reasons still not clear, it has become more intense in Catalonia than elsewhere in recent years.

The bitter irony is that al-Andalus, for much of its history, was an unprecedented model of peaceful co-existence between Muslims, Christians and Jews.

The Ramblas is one of the world’s great shared open spaces. And the ground-level mosaic by Joan Miró, on which the terrorist truck finally ground to a halt, was the great Catalan artist’s symbolic welcome to this great cosmopolitan city for all outsiders.

That sense of a shared, open and welcoming space must become characteristic not just of Barcelona but of all of our democracies if we are move beyond the brutal and futile conflict into which the Islamic State terrorists, and some western leaders, now seek to draw us.

Paddy Woodworth has reported on Spanish politics for The Irish Times since 1978, and is the author of two books on the Basque Country