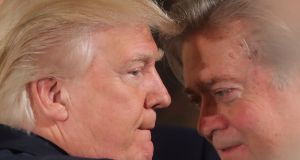 Donald Trump talks to chief strategist Steve Bannon during a swearing in ceremony for senior staff at the White House in Washington, on January 22nd. Photograph: Carlos Barria/Reuters

Mr Bannon was a force behind some of Mr Trump’s most contentious policies, including a travel ban on people from several Muslim-majority nations, and has fought with more moderate factions inside a White House riven with rivalries and back-stabbing.

Mr Bannon’s ouster comes with the president, seven months into his term in office, increasingly isolated over his comments following white supremacist violence in the Virginia college town of Charlottesville last Saturday.

“White House Chief of Staff John Kelly and Steve Bannon have mutually agreed today would be Steve’s last day,” White House spokeswoman Sarah Sanders said in a statement on Friday. “We are grateful for his service and wish him the best.”

Donald Trump praised his former chief strategist on Saturday, thanking him on Twitter for his service and his role in the presidential election campaign against Hillary Clinton.

"I want to thank Steve Bannon for his service. He came to the campaign during my run against Crooked Hillary Clinton - it was great! Thanks S," Trump tweeted.

A champion of economic nationalism and a political provocateur, Mr Bannon (63) is a former US Navy officer, Goldman Sachs investment banker and Hollywood movie producer. Mr Bannon had been in a precarious position before but Mr Trump opted to keep him, in part because his chief strategist played a major role in his 2016 election victory and is backed by many of the president’s most loyal rank-and-file supporters.

Mr Bannon returned to his post as executive chairman of right-wing Breitbart News on Friday afternoon, the website said. Prior to joining the Trump campaign, he had spearheaded Breitbart's shift into a forum for the "alt-right," a loose online confederation of neo-Nazis, white supremacists and anti-Semites. Mr Bannon said his departure from the White House signals a major shift for the Trump agenda.

I want to thank Steve Bannon for his service. He came to the campaign during my run against Crooked Hillary Clinton - it was great! Thanks S

"The Trump presidency that we fought for, and won, is over," Mr Bannon told the conservative Weekly Standard. "I just think his ability to get anything done - particularly the bigger things, like the wall, the bigger, broader things that we fought for, it's just gonna be that much harder."

He said he would use Breitbart to attack opponents of the populist and nationalist agenda he championed, including establishment Republicans. "I am definitely going to crush the opposition," Mr Bannon said.

The decision to fire Mr Bannon could undermine Mr Trump’s support among far-right voters but might ease tensions within the White House and with party leaders. Republicans control the White House and both chambers of Congress but have been unable to pass major legislative goals including a healthcare legislation overhaul because of fierce intra-party divisions.

Mr Trump ran into trouble in recent days after saying anti-racist demonstrators in Charlottesville were as responsible for the violence as the neo-Nazis and white supremacists who instigated the protests.

Those remarks sparked rebukes from fellow Republicans, top corporate executives and some close allies even as some supporters, including vice president Mike Pence, stood by Mr Trump.

Under pressure from moderate Republicans to fire Bannon, Trump declined to publicly back him on Tuesday, although he left his options open. “We’ll see what happens with Mr. Bannon,” he told reporters at Trump Tower in New York.

A source familiar with the decision, which had been under consideration for a while, said Mr Bannon had been given an opportunity to depart on his own terms. “The president made up his mind on it over the past couple of weeks,” the source said.

Mr Kelly had been evaluating Mr Bannon’s role within the White House. “They gave him an opportunity to step down knowing that he was going to be forced to,” the source said.

Mr Bannon damaged his standing by giving an interview to the liberal American Prospect this week in which he was seen to be undercutting Mr Trump’s position on North Korea. Mr Bannon told associates he thought he was talking to an academic and thought he was off the record.

He has told friends he could go back to Breitbart News if he were to leave the White House. Mr Kelly’s appointment was intended to bring order to a fractious White House beset with behind-the-scenes intrigue and back-stabbing.

Mr Bannon formerly headed the right-wing Breitbart News website and spearheaded its shift into a forum for the “alt-right,” a loose online confederation of neo-Nazis, white supremacists and anti-Semitics. Under Mr Bannon’s leadership, the Breitbart site presented a number of conspiracy theories about former Democratic presidential candidate Hillary Clinton, as well as Republicans deemed to be lacking in conservative bona fides.

In recent weeks, Breitbart has published a series of articles making a case for Lieutenant General HR McMaster’s ouster as national security advisor on the basis that he is not a strong ally of Israel and that he has staffed the National Security Council with holdovers from the Obama administration.

Just a year ago, Mr Bannon took over as head of Mr Trump’s presidential campaign. In that role, he helped engineer Mr Trump’s surprise victory over Ms Clinton.