Attacks on Spain: Solidarity in the face of terror

In the long term, solidarity, and the values that underpin it, will triumph over the dark vision espoused by violent extremists. 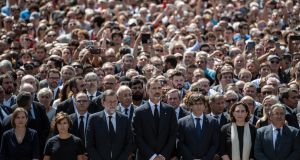 King Felipe VI of Spain and Spanish prime minister Mariano Rajoy join other dignitaries and residents of Barcelona in Placa de Catalunya on Friday to observe a minute’s silence for the victims of the prevoius day’s terrorist attack. Photograph: Carl Court/Getty Images

The more terrorism there is, the less effective it becomes. But that paradox in itself neither deters the extremists nor reassures the public. Just as people in the Middle East and north Africa have long lived with the threat of terrorism, Europeans must today factor into their daily lives the risk of finding themselves at the scene of indiscriminate, random violence. But while familiarity may diminish the shock value, it naturally does little to mitigate the widespread sense of horror and revulsion at atrocities such as that committed in Spain this week.

For the seventh time in a year, a terrorist turned a vehicle into a lethal weapon, ploughing a van into crowds of locals and tourists on one of the busiest streets in Barcelona on Thursday evening. Separately, at two locations elsewhere in Catalonia, a shoot-out left five suspected terrorists dead and an explosion occurred at a private home thought to have been in use as a bomb-making site. In all, at least 14 innocent victims lost their lives and more than 200 others were injured. The dead and wounded, targeted while simply enjoying a day out in one of Europe’s great cities, came from 34 different countries.

The first response should be a firm declaration of solidarity with Barcelona and with Spain. The pledges of support from European and world leaders are symbolically important. Even more vital are individual acts of public defiance in the face of the apocalyptic fanatics, whether expressed through vigils for the victims or simply through a determination to live just as before. In the long term, that solidarity, and the values that underpin it, will triumph over the dark vision espoused by violent extremists.

In the short and medium term, however, the authorities face an immense challenge. The threat of vehicle attacks is virtually impossible to eliminate; even the most draconian laws cannot reduce the threat to zero or anywhere near it. In the years to come, the threat is likely to increase. More than 42,000 foreign terrorist fighters travelled to join Islamic State from over 120 countries between 2011 and 2016, according to a recent report by the European Commission’s Radicalisation Awareness Network. The retreat of Islamic State in Syria and Iraq is expected to lead to an increase in the rate of returning fighters. Even a relatively minor rise could result in a sizeable increase in the security threat.

That will require European states to closely monitor and individually evaluate large numbers of suspected jihadists in circumstances where prison – itself often a centre of radicalisation – is not always an option. It will involve proper funding for models such as the UK’s anti-radicalisation Prevent strategy. And it will only succeed with investment in the sort of intensive, cross-border police and intelligence work the threat level demands.