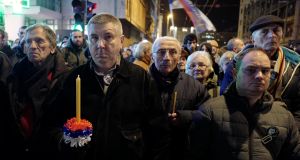 People attend a march in Belgrade, Serbia on the first anniversary of the murder of opposition Serb politician Oliver Ivanovic in the town of Mitrovica in Kosovo. Photograph: Kevin Coombs/Reuters

Thousands of people marched through Belgrade on Wednesday to protest against the rule of Serbian president Aleksandar Vucic and mark one year since the unsolved murder of Kosovo Serb politician Oliver Ivanovic.

It was the seventh major demonstration against Mr Vucic in the last two months, and came a day before a planned government-backed rally in Belgrade to welcome Russian president Vladimir Putin to Serbia.

Protesters accuse Mr Vucic of eroding Serbia’s democracy and rule of law to boost his own power and they demanded an end to political violence, more coverage of opposition views in public media, and the sacking of interior minister Nebojsa Stefanovic.

They are also calling for justice for Mr Ivanovic, a strong critic of Mr Vucic and his allies in Kosovo, who was shot dead outside his office in the mostly Serb half of the city of Mitrovica in the north of the country.

No one has been prosecuted over the murder and Milan Radoicic – an influential Serb politician and businessman who is wanted for questioning in Kosovo – is thought to be in Serbia. He denies any connection to the killing and Mr Vucic insists that he is innocent.

Pro-government groups, meanwhile, plan a major rally on Thursday to welcome Mr Putin to Belgrade and back Mr Vucic’s policy of maintaining strong ties with Russia while seeking EU membership. Critics say the authorities intend to bus many people into the capital and offer other inducements to attend the event.

“President Putin is hugely popular in Serbia. I think the biggest crowd in 20 years will come out just to see him,” Mr Vucic told Russia’s Tass news agency.

“I always consult with and take advice from president Putin . . . When I tell president Putin ‘yes’, then that’s what we do. And when I say in Washington or Brussels that we have not and will not impose sanctions on Russia, then that is true and fair.”

Russia dominates Serbia’s energy sector and is helping modernise its armed forces. The two leaders are expected to discuss further co-operation in these and other areas on Thursday.

“Today Russia has many friends, and our strategic partner Serbia has a special place among them,” Mr Putin told Serbian media before his visit.

They will also discuss Kosovo, which declared independence from Serbia in 2008 in a move that neither Belgrade nor Moscow recognise.

The EU and US are now pressing Kosovo and Serbia to establish normal relations, amid speculation that a controversial land swap between the neighbours could form a key part of such a deal.

Russia is keen to retain influence in Serbia and Republika Srpska – the Serb-run region of Bosnia – following Montenegro’s accession to Nato in 2017 and with Macedonia hoping to join the alliance this year, if a name-change agreement with Greece wins final approval from Athens.

Mr Putin criticised Nato expansion in the Balkans as “a relic of the Cold War” which “will ultimately lead not to the strengthening of stability, but to a decline in confidence and an increase in tension in Europe. ”