Death toll in terror attack on Nairobi hotel rises to 21

Eyewitness footage captures gunfire from an attack at a hotel complex in Nairobi, Kenya. Kenyan president Uhuru Kenyatta has said that four militants have been killed by security forces. Video: Sheila Munyiva 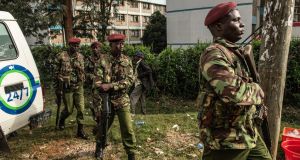 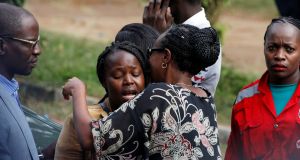 Unidentified relatives react outside the scene where explosions and gunshots were heard at the DusitD2 Hotel compound in Nairobi, Kenya. Photograph: Thomas Mukoya/Reuters.

Kenya’s president sought to restore calm on Wednesday, saying that a deadly attack by suspected al-Shabaab militants on a hotel complex in Nairobi was finished and that all the perpetrators had been “eliminated”.

Uhuru Kenyatta’s statement came after earlier false reports from officials that the siege had ended. At least 21 people were killed in the attack, Nairobi police said on Wednesday night. The death toll had earlier been put at 14.

Mr Kenyatta offered reassurances that the situation was under control and commended “the quick and effective response by our elite fighting teams”. Kenya’s tourist industry is worth $1.2 billion (€1.05 billion), attracting 1.4 million visitors in 2017, but the sector is extremely sensitive to security concerns.

The president said the incident had been dealt with “decisively” and Kenya had “shown our enemies and the world that we are ready to deal with any threat to our nation”.

Patrick Gathara, a political commentator, said police and army units had arrived on the scene more quickly and had been better co-ordinated than during a 2013 attack on the nearby Westgate shopping mall where al-Shabaab killed at least 67 people. Then, security forces were blamed for arriving late and for firing on each other in the confusion.

However, Mr Gathara said questions remained over the quality of the response on Tuesday. Communications had again been confused and contradictory, he said. “Clearly, they were getting some things wrong. It’s premature to declare the operation either a success or a complete failure. There are just questions that need to be answered.”

The attack on the DusitD2 Hotel began, according to witnesses, after four gunmen jumped out of a white car. One of the attackers was reported to have blown himself up while others shot security guards and people in the hotel and nearby offices. Video footage showed burning cars and dozens of people fleeing the scene.

The US state department said that one American had been killed. A British aid worker, named as Luke Potter, Africa programmes director for the Gatsby charity which is funded by Lord Sainsbury of Turville, was also among the dead. Many others were reported injured.

A spokesman for al-Shabaab’s military operations on Tuesday took responsibility for the attack.

The al-Qaeda-affiliated group has waged an insurgency in southern Somalia for more than a decade and intensified attacks against Kenyan targets since the country sent troops to Somalia in 2011 to support a UN-backed operation.

Three years ago, al-Shabaab militants stormed a Kenyan military base in Somalia, killing about 140 soldiers. Al-Shabaab blames Kenya for allowing its territory to be used as a US base for air attacks on its suspected camps in Somalia.

According to Africom, the US Africa Command based in Germany, Washington has stepped up drone attacks on suspected al-Shabaab terrorists since Donald Trump took office.

In 2015, al-Shabaab militants launched a raid on a teacher-training college in Garissa, near the Somali border, in which 148 people died.

“Al-Shabaab has a number of reasons why it is attacking Kenya,” said Rashid Abdi, an expert on the Horn of Africa at the International Crisis Group, a policy research organisation. “The major goal is to create pressure for the Kenyan government to have its soldiers out of Somalia.”

Mr Gathara said that Kenyans had not been consulted on the Somali intervention. “We haven’t had a real public debate about what we are doing in Somalia. How long we are going to be there and what price we are prepared to pay?” – Copyright The Financial Times Limited 2019