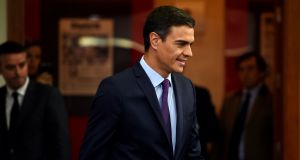 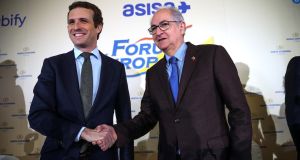 Spanish government attempts to facilitate talks with pro-independence Catalan parties have triggered a fierce backlash from the political right and dissent from within prime minister Pedro Sánchez’s own Socialist Party.

The Socialist administration’s willingness to engage with the Catalan regional government, in an effort to reduce tensions and find a solution to the ongoing territorial crisis, has frequently drawn criticism from unionist parties.

However, attempts this week to find an independent figure to be present at cross-party discussions on the issue have unleashed a particularly vitriolic attack from the right.

“He is committing a criminal act, he is a criminal [acting] against the very democratic continuity of Spanish democracy,” Mr Casado said, comparing the prime minister’s lack of legitimacy to that of a drug trafficker.

In the coming weeks, Mr Sánchez’s fragile government will need the backing of the two Catalan pro-independence parties in parliament in order to approve the 2019 budget. They have threatened to block the Bill if he does not offer concessions.

Many unionists fear that the appointment of a facilitator would lend undue credibility to Catalan nationalist demands and to the idea that the issue is comparable to an international dispute between two sovereign nations.

“This is the most serious thing which has happened since February 23rd, 1981,” Mr Casado said of the facilitator plan, in a reference to an attempted coup d’état by civil guard officers soon after Spain’s return to democracy.

The PP is organising a large demonstration in central Madrid on Sunday against the government, under the slogan “For a united Spain” and calling for immediate elections. The other main parties on the right, Ciudadanos and Vox, are also supporting the demonstration.

On Thursday, finance minister María Jesús Montero described Mr Casado’s choice of language as “reminiscent of the civil war” and Mr Sánchez defended his decision to keep channels of communication open with the independence movement.

“If we have learned any lessons from history it is that you cannot govern by ignoring minorities, excluding voices,” he said, speaking in Strasbourg.

But worryingly for Mr Sánchez, some senior figures within his own party have also spoken out.

Former Socialist deputy prime minister Alfonso Guerra warned that employing a facilitator would put Spain alongside war-torn nations such as Yemen or Burkina Faso in many people’s minds. Javier Lambán, the Socialist president of Aragón, said the facilitator proposal was confusing and that approving a budget “does not justify concessions that put in question the constitution, the unity of Spain, the rule of law or decency”.

The government has sought to play down the role of the facilitator, who has still not been named and whose functions remain unclear. The Socialist Party issued a memo clarifying that the role would not be that of a mediator and that the individual chosen would not be an international figure.

This controversy comes just days before the trial begins, in the supreme court, of 12 people accused of leading the 2017 failed Catalan drive for independence.