British prime minister insists she will deliver Brexit on time 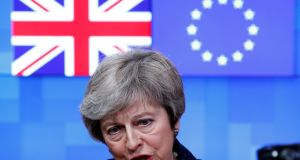 British prime minister Theresa May speaks to the press at the European Council headquarters in Brussels. Photograph: Francois Lenoir/Reuters

British prime minister Theresa May has insisted she will deliver Brexit on time.

Speaking after a series of meetings with EU officials in Brussels, Mrs May said she had raised with European Council President Donald Tusk “the language that he used yesterday, which was not helpful and caused widespread dismay in the United Kingdom”.

On Wednesday Mr Tusk suggested “a special place in hell” awaited those Brexiteers who advocated leaving the EU without making a plan for it.

Earlier, Mrs May and European Commission president Jean-Claude Juncker had “robust but constructive” talks in Brussels, according to a joint statement.

Mrs May arrived in Brussels on Thursday for crunch Brexit talks after insisting that the UK must not be “trapped” in a backstop deal on the Irish Border.

“Despite the challenges, the two leaders agreed that their teams should hold talks as to whether a way through can be found that would gain the broadest possible support in the UK parliament and respect the guidelines agreed by the European Council,” the statement said.

“The prime minister and the president will meet again before the end of February to take stock of these discussions.”

European Parliament Brexit co-ordinator Guy Verhofstadt on Thursday said Mrs May reassured the EU that there would be a backstop in the withdrawal agreement.

Mr Verhofstadt said a no-deal Brexit would spell “disaster” in both the UK and the EU and that Mrs May’s co-operation with the opposition Labour party was essential to overcoming that risk.

“So it’s important that Mrs May today in the meeting assured us that there will be a backstop. That what she said already in Belfast, there is no question to remove the backstop,” Mr Verhofstadt said.

Earlier, Mr Verhofstadt joined in with Mr Tusk’s “hell” analogy. He tweeted that Lucifer would not welcome such Brexiteers because “after what they did to Britain they would even manage to divide Hell”.

At one point during the morning, an anti-Brexit protester holding a placard attempted to block one of the vehicles in Mrs May’s convoy as it arrived at the European Commission headquarters.

The British prime minister was greeted by Mr Juncker at EU headquarters. Both leaders struck a business-like stance as they posed for pictures, but did not answer questions.

One reporter asked: “Is this hell prime minister?”

David Lidington, who is effectively Mrs May’s deputy, said Mr Tusk’s comment “wasn’t the most brilliant diplomacy in the world”.

He told BBC Radio 4’s Today programme: “I think Mr Tusk was venting yesterday, but I don’t think that will detract from what I expect to be a courteous and sensible grown-up discussion between the different EU leaders and the prime minister.”

Mrs May’s latest diplomatic offensive comes as Labour leader Jeremy Corbyn wrote to Mrs May setting out five demands, including joining a customs union, that would need to be met for Labour to back the government’s withdrawal deal on Brexit.

Mrs May is using the top-level Brussels talks with Mr Juncker, Mr Tusk and other prominent EU figures to press for legally binding guarantees on the Northern Ireland backstop. At present the backstop, which is intended to prevent the return of a hard border in Ireland, would see the UK continue to obey EU customs rules after a transition period if no wider trade deal had been reached.

In Brussels on Wednesday, Taoiseach Leo Varadkar again received reassurances that the EU backed Dublin’s position on the necessity for the backstop.

Downing Street said that Mrs May is “open to different ways” of achieving her objectives on the backstop, a measure that Mrs May herself agreed to as part of a deal with the EU last year.

She is using Thursday’s meetings to state that the British parliament has sent “an unequivocal message that change is required”.

One of the British prime minister’s key messages for EU leaders is that the House of Commons has made it clear it could support the withdrawal agreement as long as concerns about the backstop are addressed.

Meanwhile, the Daily Telegraph reported that Mrs May is seeking to delay another Commons “meaningful vote” on the British government’s Brexit stance until the end of February – just a month before the UK is scheduled to quit the EU on March 29th. – Agencies