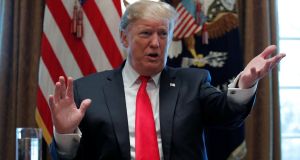 US president Donald Trump speaking at a meeting to 'discuss fighting human trafficking on the southern border' in the Cabinet Room of the White House. Photograph: Reuters/Jim Young

United States president Donald Trump has dismissed the work of a bipartisan committee charged with finding a solution to the border-wall controversy as a “waste of time” as he again threatened to invoke a national emergency to build a wall.

In lengthy comments in the Oval Office on Friday, Mr Trump said that the wall would be built “one way or another”.

“One of the things we’re considering is a national emergency. And it is – it’s an invasion of our country,” he said, adding that 90 per cent of the heroin coming into the US comes in through the southern border.

“If we build a proper barrier with great technology too we will see crime going down in the United States in percentages that we’ve never seen before,” he asserted, claiming that people in San Diego had been “begging us to build the wall”.

He said that El Paso, a city near the Mexican border with Texas, was one of the most dangerous cities in the country, but “once the wall was built it became one of the safest cities”.

A bipartisan group of members of Congress began negotiations this week with the aim of finding a solution to the funding impasse, which led to last month’s lengthy government shutdown.

The establishment of the committee was one of the conditions set down by the White House last week when Mr Trump agreed to sign a Bill allowing the reopening of the government despite not securing any money for his proposed border wall.

The three-week funding programme agreed will keep the government running until February 15th, but a longer-term solution is needed to avoid the government shutting down again on that date.

Congress needs to sign off on funding for any border security package, and Democrats have so far refused to do so. But Mr Trump could also declare a national emergency, which would allow him to tap funds from the department of defence directly for the wall, even though such a move would be likely to face legal challenges.

Mr Trump hinted that he may disclose next week in his State of the Union address whether he intends to invoke emergency powers to fund the wall.

Asked whether he would do so by reporters in the Oval Office, Mr Trump replied: “I don’t want to say. You’ll hear the State of the Union and let’s see what happens.”

Mr Trump also hit out at the “tremendous obstruction by Democrats”.

“We’re not going to get anywhere with them. I don’t think it’s good politically,” he said, adding: “I think Nancy Pelosi should be ashamed of herself.”

As Mr Trump sharpened his rhetoric on the border wall on Friday, there was good economic news for the administration as new figures showed that job numbers in January beat expectations, despite the impact of the government shutdown.

Data from the US labour department showed that non-farm payrolls increased by 304,000 in the first month of the year, well above the expectation of 165,000 jobs.

However, the bureau revised downwards the job numbers for the previous months, stating that fewer jobs than had been initially estimated had been added to the economy in December.

Mr Trump said he intended to address the country’s strong economic performance in his State of the Union address.

He also pointed to ongoing trade discussions with China, following the conclusion of two days of talks this week in Washington DC between senior US and Chinese negotiators.

Mr Trump noted that China had agreed this week to buy a “tremendous , massive amount of soybeans and other agricultural products” from American farmers.

China faces a deadline of March 1st to come up with a trade deal with the US to avoid a sharp increase in tariffs on its exported goods into the US.