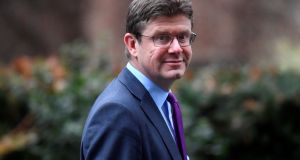 Britain’s business secretary Greg Clark says the government promised Nissan its operations would not be hit by Brexit but the car manufacturer has abandoned production plans. Photograph: Toby Melville

Conservative MPs have started at least three days of talks with ministers and officials over “alternative arrangements” to the Northern Ireland backstop that have already been dismissed in Brussels as unrealistic.

Brexit secretary Stephen Barclay met Brexiteers and Remainers in the so-called Alternative Arrangements Working Group to consider how existing technological and administrative measures could ensure that the Irish Border will remain open after Brexit.

“The secretary of state met with senior MPs and their advisers to explore in detail the proposals put forward last week in the Malthouse compromise. Discussions were detailed and constructive and the first step of a process to find common ground on the issue of the backstop. There will be subsequent meetings tomorrow and coming days,” a spokesman said.

Named after junior minister Kit Malthouse, the Malthouse compromise calls for the backstop to be replaced by a tariff-free trade area with maximum facilitation of customs.

Conservative Brexiteers and the Democratic Unionist Party, who last week voted for a government-approved amendment that endorsed Theresa May’s Brexit deal on condition that the backstop was replaced, back the Malthouse compromise.

The prime minister plans to present a proposal to the EU based on finding “alternative arrangements” and introducing a time limit or a unilateral exit mechanism to the backstop.

The EU rejected all three options during the negotiations on the withdrawal agreement and Labour’s Hilary Benn, who chairs the Commons Brexit committee, said it was too late to seek alternatives to the backstop such as those envisaged in the Malthouse compromise.

“A lot of it to me, I have to say, personally, looks very familiar if you go back to last summer when people looked at technology and trusted traders and all of that, and a great deal of effort was put into examining those as a possible way forward,” he said. “The conclusion that was reached I think on behalf of the British government and the European Union was that well, it’s not going to work,” he said. “Personally I don’t see how it can work, particularly in the very short amount of time that there is left.”

Business secretary Greg Clark revealed on Monday that the British government promised Nissan that its operations in Britain would not be adversely affected by Brexit.

The car company said at the weekend that it was abandoning plans to produce a new vehicle at its Sunderland plant, citing uncertainty about Brexit as one of the factors that influenced the decision.

In a letter to Nissan’s then chief executive Carlos Ghosn in 2016, Mr Clarke promised a £61 million financial package if the company made the investment it has now decided to abandon.

“The government fully recognises the significance of the EU market to your presence in Sunderland. It will be a critical priority of our negotiation to support UK car manufacturers and ensure that their ability to export to and from the EU is not adversely affected by the UK’s future relationship with the EU,” he said.

Nissan will now have to reapply for the financial aid, the promise of which was not disclosed until Monday.

Mr Clark told the House of Commons he was “disappointed” the 740 jobs earmarked for Sunderland would not be coming.