Russian spies lose their way in age of internet search 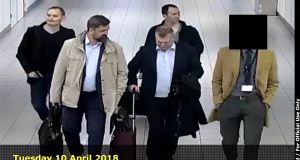 It must go down as one of the most embarrassing months ever for Russia’s military intelligence.

In the 30 days since UK prime minister Theresa May revealed the cover identities of the Salisbury poison suspects, the secretive GRU (now GU) has been publicly exposed by rival intelligence agencies and online sleuths, with an assist from Russia’s own president.

Despite attempts to stonewall public inquiry, the GRU’s dissection has been clinical. The agency has always had a reputation for daring, bolstered by its affiliation with special forces commando units and agents who have seen live combat.

But in dispatching agents to the Netherlands who could, just using Google, be easily exposed as graduates of an elite GRU academy, the agency appears reckless and absurdly sloppy.

One of the suspected agents, tipped as a “human intelligence source” by Dutch investigators, had registered five vehicles at a north-western Moscow address better known as the Aquarium, the GRU finishing school for military attaches and elite spies. According to online listings, which are not official but are publicly available to anyone on Google, he drove a Honda Civic, then moved on to an Alfa Romeo. In case the address did not tip investigators off, he also listed the base number of the Military-Diplomatic Academy.

That was the same school where Anatoliy Chepiga, the alleged true identity of the Russian suspect in the Salisbury poisoning, finished his education. Viktor Suvorov, a GRU agent who later defected to the west, described the academy as so secret that Soviet citizens could be jailed just for revealing its existence.

The internet has now made it far harder to hide that evidence. But the GRU apparently thought that would not matter.

Meanwhile, most of the alleged agents could be found online.

One of the men, Aleksei Morenets, an alleged hacker, appeared to have set up a dating profile.

Another played for an amateur Moscow football team “known as the security services team” a current player told the Moscow Times. “Almost everyone works for an intelligence agency.” The team rosters are publicly available.

Russia has claimed that the investigations are fake and that researchers are in league with western intelligence. But most of the evidence to uncover the spies was already out there, and conveniently timestamped on social media.

The saga began after May’s announcement last month, when Vladimir Putin ordered the two Salisbury suspects to appear on television. There, the two men fumbled through an awkward story about visiting Salisbury twice to see the cathedral, while an editor for state television cast aspersions that they were gay.

It didn’t help. One of the two men was outed as a likely GRU colonel anyway, after online investigators dug up photographs from his military service and leaked passport records.

Along the way, the researchers from Bellingcat and the Insider also recognised that the men were issued sequentially numbered passports by a special division, making it easier for anyone with access to a leaked database to identify them.

And then came Thursday’s bombshell: four men outed by Dutch investigators for attempting to hack into the Organisation for the Prohibition of Chemical Weapons (as well as Malaysia’s investigation into a downed jetliner).

The alleged spies were caught carrying enough telephones to fill an electronics store. Moreover, like all meticulous Russians on a business trip, they held on to their taxi receipts from GRU headquarters.

Russia will publicly deny the latest reports and revelations about the alleged GRU agents. It has no other alternative. But the exposure of several consecutive European operations should raise questions about whether Russian military intelligence is being intentionally provocative or has simply gone off the rails. – Guardian Service