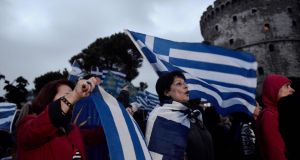 With a northern arm of the Aegean Sea at her back, Giorgia Bitakou unfurls a blue flag emblazoned with an ancient Greek symbol of the sun and raises it aloft, as if standing in defence of the bronze warrior who towers above her.

Alexander the Great, who set out from near here to build an empire that would reach India and Egypt, seems in little need of protection as he gazes out over Thessaloniki and the Thermaic Gulf from atop his trusty horse Bucephalus.

Yet Bitakou believes Greek identity and democracy now face mortal danger from western elites and globalisation, and that the frontline in the fight for Greece’s future is here, in its province of Macedonia.

The immediate threat, as Bitakou and like-minded Greeks see it, is a historic deal signed this summer by the governments of Greece and the neighbouring country of Macedonia, a former Yugoslav republic just 80 km north of Thessaloniki.

The pact would end a 27-year row over the mostly Slavic country’s use of that name, which Athens says implies a territorial claim to the Greek region of Macedonia and the legacy of the kingdom ruled by Alexander – who died in Babylon some eight centuries before Slavic tribes settled in the Balkans.

The agreement would see the country renamed North Macedonia, in exchange for Greece lifting a veto on its bid to join the EU – a distant prospect – and Nato, which could happen next year if the parliaments of both states back the deal.

Many people on each side of the border fiercely oppose the accord, however, calling it an attack on their national identity and sovereignty, and even treason.

That puts them at odds not only with their own governments, but with the United States, the European Union and Nato, which strongly support the pact as a way to boost stability and western influence in the Balkans, and counteract lingering political and ethnic tension and the ambitions of Russia and China in the region.

Bitakou was an organiser and spokeswoman for rallies that brought hundreds of thousands of people onto the streets of Athens and Thessaloniki earlier this year, to protest against the name deal and vent anger over the malaise that she believes made the agreement possible: the erosion of Greek sovereignty and democracy that accompanied eight years of economic misery and EU-imposed austerity.

“Some people gave blood to unite Macedonia with Greece again,” says Bitakou, referring to the first Balkan War of 1912-13 that saw Greece, Serbia and Bulgaria drive out the Ottomans and divide up the wider Macedonia region.

“If we save Macedonia, we can save Greece – if we lose it, we will loose Greece,” she adds.

“But Macedonia is not the only problem. The problem is the Greek political system that works mainly for America and Germany. We don’t have democracy anymore in Greece – the Greek people do not decide and we are losing our country.”

The name deal bars territorial claims between the neighbours and, while recognising the Macedonian nationality and language, it states that they are not connected to the culture or heritage of ancient Greece.

It also provides for “corrective action” over wrongful use of national symbols, such as the Greek Vergina Sun that adorns the blue-and-gold flag brandished by Bitakou.

Yet that does not reassure critics in either country, who see the deal as an imposition by western powers that are pursuing a geopolitical agenda over the will of small nations.

It is a feeling reinforced by reaction to last Sunday’s referendum on the name deal in Macedonia, when only 37 per cent of registered voters took part – well below the 50 per cent required for the ballot to be legally valid.

The Skopje government and EU, US and Nato officials declared it a triumph, however, focusing on the 91 per cent Yes vote and insisting that ratification should proceed swiftly in the Macedonian parliament; if it is approved there, Greek deputies will also vote on the agreement.

It surely reminded Greeks of their 2015 referendum, when they backed prime minister Alexis Tsipras’s call to oppose the harsh terms of an EU bailout, only to see him sign off on swingeing austerity measures barely one week later.

“The referendum in Skopje is not valid but there isn’t democracy for them either,” Bitakou, a journalist and fight promoter, said after Sunday’s vote.

Opposition to the name-change deal and how it is being championed goes well beyond radical nationalist circles in Macedonia and Greece, however.

In bringing Balkan states into the fold, the EU and Nato must be careful not to weaken further their people’s faith in democracy; they may want to join the world’s most powerful clubs, but no one likes to feel ignored.