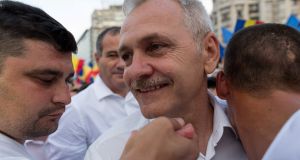 Liviu Dragnea, who controls the Romanian government from behind the scenes. Photograph: Liviu Florin Albein/Iquam Photos via Reuters

The European Parliament will discuss Romania’s recent raft of controversial judicial reforms on Wednesday, following withering criticism of the Bucharest government’s anti-corruption credentials from the European Commission and United States.

Since taking power early last year, the ruling Social Democrats (PSD) have sought to soften aspects of Romania’s anti-graft law and tighten political control over the courts, triggering the nation’s biggest protests since its 1989 anti-communist revolution.

Critics say the reforms are intended to protect PSD-linked figures, including party leader Liviu Dragnea, who cannot serve as premier after being found guilty of vote-rigging and is now fighting a recent conviction for abuse of office.

The EU fears Romania’s backsliding on corruption shows it is going the way of Hungary and Poland, which are already facing legal action from Brussels over alleged moves by their populist governments to weaken the rule of law.

“Romania has made progress in the past, sometimes even spectacular progress, but it’s moving back in a way that would be damaging not only for Romanian democracy but for the place Romania has built as an EU member state,” European Commission vice-president Frans Timmermans said late on Monday night.

“We will continue the dialogue,” the Balkan Insight news service quoted him as telling a meeting of the European Parliament’s human rights and civil liberties committee. “But if the rules agreed at the European level are violated, the Commission will not hesitate to take the consequences and, where appropriate, take Romania to court.”

His broadside came as Romanian prime minister Viorica Dancila – whose government is controlled from behind the scenes by Mr Dragnea – prepared to defend her administration’s record before parliament in Strasbourg on Wednesday.

Mr Timmermans spoke hours after the US ambassador to Romania, Hans Klemm, delivered an even blunter assessment to law students at Bucharest University. “The Romanian justice system ... may be significantly dismantled in less than a year,” he warned.

“Meanwhile, evidence continues to accumulate that magistrates are increasingly targeted politically and in the media, for court decisions and public opinions that political leaders see as endangering their private interests or challenging their legislative agenda,” he added.

“These accumulated changes threaten to turn back the clock to the early 2000s, when the Romanian judiciary was plagued by corruption and political influence.”

In July the government forced out Romania’s top anti-corruption prosecutor, Laura Codruta Kovesi, whose investigations of powerful politicians and businessmen were lauded by the West, and in August more than 450 people were hurt when riot police attacked an almost entirely peaceful protest in Bucharest.

“I have to admit that I’m quite disappointed with this attitude, because I never imagined that a country in the European Union could be threatened in such a brutal way,” Mr Dragnea said of Mr Timmermans’s criticism.