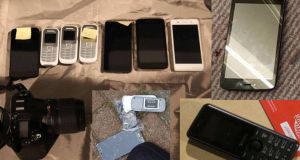 Mobile phones and a camera recovered from four GRU officers who were alleged to have to have hacked the WiFi networks of the Organisation for the Prohibition of Chemical Weapons (OPCW). Photograph: PA

Russia has been accused of acting like a “pariah state” by the UK defence secretary after allegations intelligence officers from the Kremlin tried to hack the UK foreign office and the international body investigating the Salisbury nerve agent attack.

Dutch authorities disclosed on Thursday how — with the help of UK intelligence - they thwarted an attempted cyber attack on the headquarters of the Organisation for the Prohibition of Chemical Weapons (OPCW) in The Hague.

Peter Wilson, the UK ambassador in The Hague, said both the UK foreign office and Defence and Science Technology Laboratory at Porton Down were also targeted by a group of GRU military intelligence service hackers in Russia known as “Sandworm”.

Moscow has called the accusations “another orchestrated act of propaganda” as part of an “anti-Russian campaign of spy mania”, according to the news agency Tass.

But Gavin Williamson, speaking to Channel 4 News, said the attacks were those of a “pariah state” acting from a position of weakness.

He told the programme: “These are not the actions of a great power.

“These are the actions of a pariah state and we will continue working with allies to isolate them and make them understand they cannot conduct themselves in such a way.”

Elsewhere, the US Department of Justice said it had indicted seven suspected GRU officers for “malicious cyber activities” against the US and its allies — including some of those named in connection with the OPCW attack.

He said the UK government would now be entering into discussions with allies on what new sanctions could be imposed against the Kremlin.

Meanwhile, Labour’s deputy leader Tom Watson has written to Mr Hunt to ask what investigations are taking place into Russian attempts to influence elections, including the Brexit referendum.

“This is not about undermining the result of the 2016 referendum. This is about defending our democracy and protecting ourselves from foreign infiltration and influence,” he wrote.

In a day of tensions between East and West, Dutch authorities said GRU operatives sent “spear phishing” emails to the headquarters of the OPCW — which was helping the UK authorities to identify the deadly nerve agent used in the attack — in an attempt to compromise its computers.

When that failed, a GRU “close access” team was sent from Russia to the Netherlands to try to penetrate their cyber defences from close quarters.

While the Russians were escorted out of the country, investigators uncovered evidence that they had been preparing to travel on to Switzerland to target the OPCW’s laboratory in Spiez.

They also found details of other operations some of the men had been involved in — including the hacking of the Malaysian investigation into the downing of flight MH17 over Ukraine and the World Anti Doping Agency (Wada) in Switzerland.

UK Europe minister Alan Duncan said there was a pattern of hacking to “distort, corrupt and destroy” investigations into Russian crimes.

He said: “What’s absolutely apparent is, there we were having Novichok used against us in the UK and the Russians were denying it, when at the very same time, or very shortly afterwards, they were trying to hack into the OPCW in the Hague and subject it to a cyber attack.

“The pattern I think we have been able to piece together is they were using cyber attacks and malware to distort, to corrupt and to destroy the processes which were those investigating Russian activity — chemical attacks, doping, and downing a flight.

“When it comes to interference in elections, the kinds of which we have seen in Montenegro, no country is secure or wholly protected from what could be the next cyber attack or intrusion from the Russian state.”

Mr Duncan warned Russian hackers could “shut down a bank or disrupt a power station” next and he believed there would now be global action on top of sanctions to stop further Russian attacks.

“There are lots of sanctions against Russia already and, in economic terms, they are hurting,” he said. “There must be penalties for doing it and the world will, I’m sure, speak further about what collective action they can and should take.”– PA