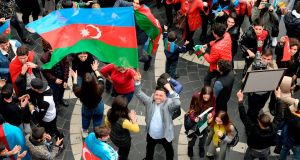 Overjoyed Azerbaijanis celebrate in the streets of the capital Baku. Photograph: Getty

An agreement to end fighting between Armenian and Azerbaijani forces over Nagorno-Karabakh sets the stage for a more intense rivalry between Russia and Turkey in the south Caucasus and beyond.

Moscow deployed some 2,000 troops to Nagorno-Karabakh as the deal took effect on Tuesday. It was an operation that looked as swift and decisive as Russia’s previous efforts to end the crisis were weak and unsuccessful.

Three earlier attempts to impose a Russian-brokered ceasefire failed and, while Moscow made clear that it would only assist its ally Armenia if fighting spread to its territory, Azerbaijan benefited from Ankara’s vocal political support, the firepower of its advanced drones, and the reassuring presence of Turkish fighter jets stationed at an Azeri airfield.

As the Kremlin sought to preserve good ties with both ex-Soviet states, Turkey moved in lockstep with Baku in decrying three decades of negotiations mediated by Russia, France and the United States and making clear that Azerbaijan would now retake Nagorno-Karabakh by force unless Armenian troops withdrew.

The restoration of Azeri control over the whole of Nagorno-Karabakh – which became a possibility this week – could have caused a humanitarian disaster for its ethnic Armenian residents. At the same time, it would have deprived Russia of much of its leverage over Armenia and Azerbaijan.

By stepping in now, as signatory to a peace deal that leaves the status of core areas of Nagorno-Karabakh in question, Russia has ensured that through its peacekeepers and diplomats it retains a key role in the future of the south Caucasus and remains an important arbiter in relations between Yerevan and Baku.

Without signing any deals or deploying troops, however, Turkey has also now made itself a powerful player in regional political, economic and military affairs.

Azerbaijan says Turkish and Russian officers will staff a centre to monitor implementation of the peace accord. More importantly, the deal provides for a road cutting through Armenia to link most of Azerbaijan with its exclave on the Turkish border, giving Turkey a direct land corridor to all of its ally’s territory.

Most significantly, perhaps, Azerbaijan and Turkey have shown that the course of a major dispute between ex-Soviet states can be changed without Kremlin approval, and with no significant EU or US involvement.

Whether Russia and Turkey now co-operate or clash in the south Caucasus – at a time when they back opposing sides in war-torn Syria and Libya – will be crucial to the region’s long-term peace.