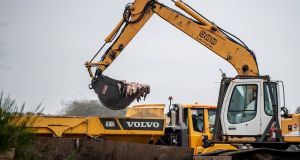 The Danish government put forward hastily drawn up legislation on Tuesday to back up its order to cull all the country’s farmed mink, admitting it lacked the legal basis for the measure aimed at preventing human contagion of a mutated coronavirus strain.

Authorities last week embarked on a plan to eliminate Denmark’s entire population of 17 million mink, one of the world’s biggest, saying the new strain could move to humans and evade future Co vid-19 vaccines.

However, the minority Social Democratic government has since drawn fierce criticism from the industry and lawmakers who said the order, which followed earlier culls of infected mink, was illegal and questioned the science behind it.

The World Health Organisation has said transmission of the virus between mink and humans was “a concern” and British health secretary Matt Hancock suggested on Tuesday the international community should look again at the industry.

Mr Hancock told the House of Commons he was concerned about how virulent the virus had become across the mink population. “I think there is an international case on public health grounds for addressing this question of mink farming, which we banned in the UK two decades ago,” he said.

“It was due to come to an end in Europe in 2023 anyway but people will have their own views on animal welfare grounds and I have certainly got mine.”

On Tuesday afternoon, the Danish government presented draft emergency legislation to back up the cull order given last week, proposing a ban on all mink breeding in the country until 2022.

The opposition says the cull of healthy mink should not have been initiated before compensation plans were in place for the owners and workers at some 1,100 mink farms.

The draft bill proposes compensation for farmers who have culled their entire herd by November 16th at a suggested level based on the value of their herd along with consequential losses.

Late on Monday, agriculture minister Mogens Jensen said he regretted “the lack of clarity” in the initial instruction, which ordered mink farmers with healthy mink to cull their herds.

On Tuesday, the Danish Veterinary and Food Administration apologised to mink farmers in a letter, saying it still recommended the culling, even though current legislation could not force them to go ahead with it.

Tage Pedersen, head of the Danish mink breeders’ association, has urged farmers to continue the cull despite the legal uncertainty, saying the industry, which employs around 6,000 people and exports fur pelts worth nearly €700 million annually, was finished.

“We are still culling,” said Hans Henrik Jeppesen, whose mink farm is located far away those infected. “I still think the law will be passed at a later stage.” – Reuters/PA