‘Serious’ second wave of Covid-19 has left more than 11,000 hospitalised across country 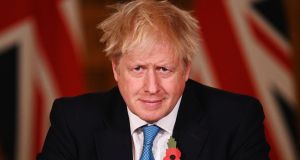 UK prime minister Boris Johnson: ‘The UK government and the devolved administrations are working together on a joint approach to the Christmas period, because all of us want to ensure families can come together, wherever they live.’ Photograph: Leon Neal/PA Wire

Boris Johnson has promised Britain “as normal a Christmas as possible” if people fully comply with a national lockdown that came into force on Thursday. Speaking at a press conference in Downing Street alongside National Health Service chief executive Simon Stevens, the prime minister said there was light at the end of the coronavirus tunnel.

“The UK government and the devolved administrations are working together on a joint approach to the Christmas period, because all of us want to ensure families can come together, wherever they live. The advice I’ve received suggests that four weeks is enough for these measures to make a real impact so these rules will expire. There is light at the end of the tunnel,” he said.

Mr Stevens said the second wave of coronavirus was already putting a strain on the NHS, with more than 11,000 people with the virus in hospital in England. The health service’s capacity to deal with the pandemic has been further challenged by the fact that about 30,000 NHS staff are off work with coronavirus or obliged to self-isolate.

“This second wave of coronavirus is real and it’s serious. The health service has been working incredibly hard to prepare and to catch up on the care that was disrupted during the first wave,” he said.

Earlier on Thursday, chancellor of the exchequer Rishi Sunak told MPs that the government’s furlough scheme will continue until March 2021, paying 80 per cent of employees’ wages up to a maximum of £2,500 a month. The scheme was phased out over the past three months and was due to end on October 31st but the government announced this week that it would be extended until the end of the lockdown on December 2nd.

“Given the significant uncertainty, a worsening economic backdrop and the need to give people and businesses security through the winter, I believe it is right to go further,” Mr Sunak said.

The decision to extend the scheme, which could cost about £5 billion a month, is the latest in a succession of government U-turns on coronavirus in recent weeks. Mr Johnson’s announcement of a national lockdown followed three weeks during which he condemned and ridiculed Labour leader Keir Starmer’s call for such restrictions.

Mr Sunak has also been strident in his rejection of opposition calls for the furlough scheme to be extended into next year but in the House of Commons on Thursday he defended his change of course.

“Political opponents have chosen to attack the Government for trying to keep the economy functioning and to make sure the support we provide encourages people to keep working. They will now no doubt criticise the Government on the basis that we have had to change our approach, but to anyone in the real world that is just the thing you have to do when the circumstances change. We all hope for the best but make sure we plan for any eventuality,” he said.