Coronavirus: New lockdown in Beijing amid fears of second wave 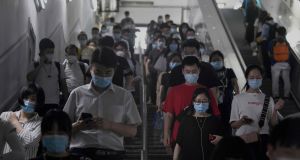 Beijing has reintroduced strict lockdown measures and launched a massive test and trace programme as a new coronavirus cluster was identified in the capital’s largest wholesale market, prompting fears of a second wave of the deadly outbreak where the virus first emerged.

Rolling out a mass nucleic acid testing programme, 200 booths with a capacity to test 90,000 people daily were set up across the city. More than 76,000 people were tested on Sunday alone.

Xifadi market is the largest food market in Asia and provides about 80 per cent of the Chinese capital’s fresh produce.

The risk of the latest outbreak spreading extensively was “very high”, vice premier Sun Chunlan said, given the number of visitors to the market and their transient nature.

Three Chinese provinces – Liaoning in the northeast, Hebei near Beijing and Sichuan in the southwest – have already reported coronavirus cases that had close links to infections in the Beijing market.

With more than 100 cases reported in the recent cluster the government had “entered a war-time mode” to contain the spread and sent almost 100,000 epidemic control staff into the “battlefield”.

Prior to the latest outbreak Beijing had only recorded about 600 confirmed cases – including imported infections from overseas travellers – and nine deaths. Nationally there have been 83,000 infections and 4,634 fatalities.

The latest outbreak in China, where the disease first emerged in the central city of Wuhan in late December, is a blow to the efforts to revitalise the country’s economy after a long winter under nationwide lockdown.

Chinese health authorities said the virus was detected in the market on a chopping board used to prepare imported salmon, and their preliminary assessment of the gene sequencing showed the strain of virus was similar to that seen in outbreaks in Europe.

The World Health Organisation said it had been informed of the outbreak and the ongoing investigation by Chinese officials.

“WHO understands that genetic sequences will be released as soon as possible once further laboratory analyses are completed,” it said in a statement.

A recent report by the Associated Press (AP) news agency said that while the WHO had publicly praised China in January for what it called a speedy response to the new coronavirus, behind the scenes there was anger in Geneva that in the early stages of the outbreak China stalled on providing crucial details, costing the world valuable time.

Chinese officials “sat on releasing the genetic map, or genome, of the virus for over a week after multiple government labs had fully decoded it, not sharing details key to designing tests, drugs and vaccines”, the report said.

Strict controls on information and competition within the Chinese public health system were largely to blame, the AP found from internal documents, emails and dozens of interviews.

When asked at a media briefing in Beijing on Monday when China would be sharing data from the recent cluster with the WHO, spokesman Zhao Lijian said he was “not aware of the details” but Beijing and the WHO were “in close communication”.