Little Britain comedy taken off Netflix, BBC iPlayer over use of blackface

HBO Max has removed the film 'Gone with the Wind' from its streaming service over its depiction of slavery. It joins media companies that have pulled controversial TV shows as demand for racial sensitivity increases across the US. Video: Reuters 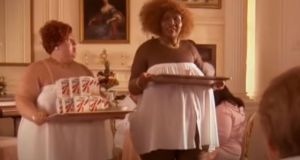 The British comedy Little Britain has been removed from several streaming services – including Netflix, the BBC’s iPlayer and BritBox – over its repeated use of blackface.

A BBC spokesperson told the Telegraph newspaper that “times have changed” since the sketch comedy program first aired in the mid-2000s.

The move comes amid global protests against racism and police brutality that have put TV shows under scrutiny following the death of George Floyd in the United States.

Other shows with blackface portrayals or white actors caricaturing people of colour are still available on streaming services, the Daily Mail reported.

The moves to cut Little Britain highlight the liabilities streaming companies face with their historical libraries, which often contain rights to shows featuring insensitive or racist scenes and themes that could not be greenlighted by a major studio today.

Disney has refused to run 1946 film Song of the South, which features racial stereotypes, on the company’s Disney+ streaming service. Executive Chairman Bob Iger told a shareholder who asked about the film earlier this year that, “It was just not appropriate in today’s world.”

The reality show, which had aired on various networks for three decades, billed itself as a “raw and realistic series” with “unprecedented access into the daily lives and work of police” across the United States.

Meanwhile, HBO Max has removed from its catalog Gone With the Wind the 1939 movie long considered a triumph of American cinema but one that romanticies the Civil War-era South while glossing over its racial sins. – Agencies