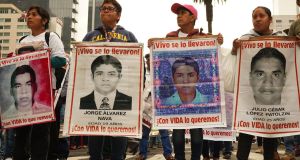 Parents hold photographs of their children, 43 students from the Ayotzinapa college in Guerrero who were kidnapped and disappeared in September 2014, during a march in Mexico City in October 2019. Photograph: Eoin Wilson

More than five years after 43 students from the Ayotzinapa rural teacher training college in Guerrero were kidnapped by Mexican police and subsequently disappeared, their families marched once more in Mexico City to demand justice and the return of their sons.

Parents held portraits of their children, with the simple though increasingly unrealistic demand: “They took them alive, and alive we want them returned.” Student colleagues, male and female, marched in disciplined lines, giving clenched fist salutes and chanting continuously for the length of the 2½km march on October 26th.

As the protest passed steadily from Ángel de la Independencia to the Alameda, thousands lined the streets of Mexico City’s wide tree-lined Avenida Paseo de la Reforma. They were not there in solidarity with the marchers, however.

Instead they were awaiting a Day of the Dead parade inspired by the opening scene of the 2015 James Bond film Spectre. Two very different spectacles: one fashioned from a Hollywood blockbuster that projects Mexico’s rich cultural heritage to the world; the other a response to the kidnapping of 43 students by forces of the state and their probable murder.

Usually celebrated between October 31st and November 2nd, Day of the Dead is a Mexican holiday during which, according to traditional belief, the souls of the dead return to the plane of the living to visit their families and loved ones.

Among those on the Ayotzinapa march was activist Julia Klug, her face painted as a calavera, or skull, with teeth and muscle exposed. For Klug, the imagery of Day of the Dead serves as a tool of protest, not only as a celebration.

“Today I’ve come representing death because there were various young students who were massacred, including one who had all the skin torn from his face,” she said, referring to the brutal torture and murder of Julio César Mondragón.

Mondragón was one of six people killed during or shortly after the kidnaping of the 43 students in the town of Iguala. Investigators stated that the skin and muscles of his face had been torn away and he sustained 64 fractures in 40 bones, primarily in his skull, face and spine.

The Ayotzinapa case drew worldwide condemnation, not only over the involvement of elements of the Mexican state in the kidnapping and presumed murder of the 43 students, but in persistent allegations of a cover-up, making it one of the biggest scandals of Enrique Peña Nieto’s six-year presidency.

An official report found that the students, who were returning by bus to their all-male teacher training college in Ayotzinapa after attending a protest in a nearby town, were seized by municipal police officers who handed them over to a local drug gang. The report concluded that the drug gang had killed the 43, burned their bodies and dumped the ashes in a local stream.

Human rights groups and international NGOs have described the report as flawed, however, and in September this year the Mexican government announced a new investigation.

The episode remains one of the most visible in a litany of kidnappings and massacres by criminal gangs and by the Mexican state since the then president Felipe Calderón launched his “war on drugs” in late 2006. Estimates of the numbers killed in the drug wars vary, but some place them as high as 200,000.

Only on occasion do the killings make international headlines, such as the murder this week of nine American Mormon women and children at the border of Chihuahua and Sonora states, victims of a territorial dispute between an arm of the Sinaloa Cartel and a rival gang, according to officials.

Mexico has experienced its highest ever murder rate in 2019, with an estimated 17,608 people killed between January and June, according to statistics from the National Public Security System.

A report by Mexican academics Sandra Ley and Guillermo Trejo partly attributed this to the election of Andrés Manuel López Obrador to succeed Peña Nieto in December 2018. With the uprooting of a delicate balance of power between previous ruling parties, the state and criminal organisations, violence increases, the argument goes.

For those many thousands of Mexicans who have lost loved ones to violence, and who have not found justice, Day of the Dead can be a cathartic experience, argues Shawn Haley, an anthropologist and expert on Day of the Dead based in Oaxaca.

“Day of the Dead serves a really good purpose here, in the sense that violence, such as drug violence, obviously tears families apart.

“But for a lot of these people, on Day of the Dead everyone comes home, living or dead. So Day of the Dead actually brings the families back together again, because those who died by violence or otherwise, can come back home, and they’re still part of the family”, he says.

For this communion with the dead to work, however, the families must know that their loved ones have died and must have buried them, Haley adds.

More than 30,000 bodies and human remains lie unclaimed and unidentified in Mexican morgues, according to figures published last week by the Mexican National Human Rights Commission.

In the case of the families of the disappeared of Ayotzinapa, no closure to their suffering looks imminent. Reflecting on this, Rodolfo Soriano-Nuñez, a sociologist of religion and culture based in Mexico City, draws comparisons with his own family’s celebration of and communication with dead loved ones.

“I have the luxury of knowing how my dead have died and where they are buried. Many of the people who are looking for their relatives in Mexico don’t have that luxury”, he said.

For Emiliano Navarrete, the father of José Navarrete González, one of the disappeared of Ayotzinapa, Day of the Dead is not an opportunity to mourn his son.

“There’s absolutely no scientific proof that our sons are dead, so we’ll keep searching for them alive,” he tells The Irish Times.

Such a resolute refusal to accept what seems increasingly inevitable, the murder of their children after their kidnapping by police, is shared by the other parents, including Cristina Bautista Salvador, mother of Benjamín Ascencio Bautista, another of the 43 disappeared students.

“It has been five years and one month without knowing anything about them. They were disappeared by the state, because federal, municipal and state police were involved” she said.

For many families in Mexico, such as the parents of the 43 students of Ayotzinapa, Day of the Dead holds little celebration of lives well-lived, only memories of loved ones disappeared, questions unanswered and justice undelivered.