Authorities say 24 people remain in hospital, five are in a critical condition 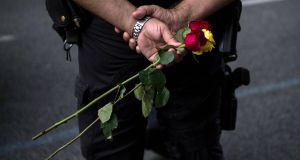 The death toll from the recent terror attacks in Spain has risen to 16, as a German woman has died from the injuries she suffered in Barcelona, health authorities in Catalonia said.

The woman (51) died on Sunday in the intensive care unit of Barcelona’s Hospital del Mar, the regional health department said.

Authorities have now raised to 14 the death toll in the van attack in Barcelona’s popular Las Ramblas boulevard.

Another man was stabbed to death in a carjacking as the van driver made his getaway, and a woman died in an attack in nearby Cambrils.

More than 120 people were wounded.

Authorities say 24 remain in hospital, five in a critical condition.

Some 500,000 people marched on Saturday in Barcelona to condemn the attacks.