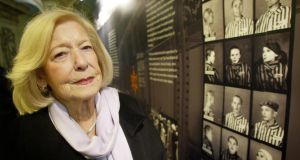 The Holocaust Educational Trust said Gena Turgel dedicated her life to sharing her story of surviving the Jewish ghetto in Krakow and the camps at Auschwitz, Buchenwald and Bergen-Belsen. Photograph: Paul Faith/PA Wire

A Holocaust survivor who became known as the Bride of Belsen after she married a British soldier involved in the liberation of the Nazi death camps has died aged 95.

Gena Turgel, who survived the Krakow ghetto, a death march, Auschwitz and Bergen-Belsen, spent much of her life teaching British schoolchildren about the horrors of the Holocaust.

Karen Pollock, the chief executive of the Holocaust Education Trust, said Turgel was “the most beautiful, elegant and poised lady. Her strength, determination and resilience were unwavering, her powerful and wise words an inspiration.

“Gena dedicated her life to sharing her testimony to hundreds of thousands in schools across the country. Her story was difficult to hear - and difficult for her to tell, but no one who heard her speak will ever forget.

“A shining light has gone out today and will never be replaced.”

Turgel was 16 when the Nazis bombed her hometown of Krakow, Poland, in September 1939. Two years later, she, her mother and four of her nine siblings moved to the ghetto, with only a sack of potatoes, some flour and a few personal belongings.

One brother was shot by the SS in the ghetto; another fled and was never seen again. A sister and her husband were shot after being caught trying to smuggle food into the Plaszow labour camp, where they had moved.

In the winter of 1944-45, Turgel, her mother and sister were sent to Auschwitz. Later she and her mother were forced to join a death march, leaving behind the sister, who they never saw again.

They eventually arrived at Bergen-Belsen, where Turgel worked in a hospital. “When I arrived in Bergen-Belsen concentration camp, I saw heaps of bodies lying around. Not just one or two, but mountains as high as a tree in the garden,”

“You could not distinguish if they were men or women - bones, skeletons, children’s bodies. You can’t possibly imagine the state of the place, it was horrendous.”

She helped care for Anne Frank, who was dying from typhus. “She was delirious, terrible, burning up. I gave her cold water to wash her down,” Turgel said.

“We did not know she was special, but she was a lovely girl. I can still see her lying there with her face, which was so red as she had a breakout. And then she died.”

On April 15th, 1945, the British army liberated Bergen-Belsen. Among the soldiers was Norman Turgel, whom Turgel married six months later wearing a wedding dress made from a British army parachute - now in the Imperial War Museum in London. The British press called her the Bride of Belsen.

Jonathan Sacks, a former chief rabbi, said Turgel was “one of the most remarkable Holocaust survivors I had the privilege to know”.

He said: “She was a blessing and inspiration to our community. Her work to educate generations about the horrors of the Holocaust was as powerful as it was tireless.

“Throughout her life, she lit countless candles in the human heart and helped bring much light to the world.”Turgel’s memoir, I Light A Candle, was published in 1987.–Guardian