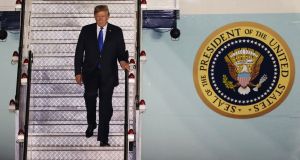 US President Donald Trump disembarks from Air Force One at the Paya Lebar Air Base in Singapore, on Sunday. Photograph: SeongJoon Cho/Bloomberg

Donald Trump was somewhere over the Atlantic in Air Force One on his way to Singapore when he watched the closing press conference of the G7 summit.

Mr Trump had left the gathering of world leaders earlier in Quebec hours before it officially ended, having arrived late the previous day.

The US President was reportedly enraged when he tuned in to the news conference and heard Canadian prime minister Justin Trudeau say that Canada was not going to be pushed around by the US. The comments prompted the President to send a series of tweets, announcing that the US would not sign the final communiqué and lambasting Justin Trudeau as “dishonest and weak.”

Though the twitter-storm was astonishing – just hours earlier Mr Trump rated his relationship with the leaders of France, Germany and Canada as a “ten,” even as he continued to grumble about unfair trade practices – there were hints that the President was unhappy even before Mr Trudeau’s press conference.

Shortly before Mr Trump’s inflammatory tweets, National Security Advisor John Bolton tweeted a picture of the other leaders standing around the US president in a circle. Mr Trump is sitting at a table, arms-folded defiantly. “Just another #G7 where other countries expect America will always be their bank. The President made it clear today. No more.,” Mr Bolton tweeted.

PM Justin Trudeau of Canada acted so meek and mild during our @G7 meetings only to give a news conference after I left saying that, “US Tariffs were kind of insulting” and he “will not be pushed around.” Very dishonest & weak. Our Tariffs are in response to his of 270% on dairy!

The United States will not allow other countries to impose massive Tariffs and Trade Barriers on its farmers, workers and companies. While sending their product into our country tax free. We have put up with Trade Abuse for many decades — and that is long enough.

Mr Trump’s twitter storm is the latest example of the President’s impetuous approach to policy-making, and his tendency to say one thing in the presence of allies, and another when they are out of earshot.

It also marks a new low in the relationship between the United States and its allies, and may perhaps cross a line for other members of the G7.

There were signs of increasing frustration from the other G7 countries in the run-up to the summit. A joint press conference by Mr Trudeau and French President Emmanuel Macron on the eve of the gathering set the tone, suggesting that US allies were beginning to lose patience with Donald Trump.

Like many leaders from across the world, Mr Macron and Trudeau and German chancellor Angela Merkel have made the pilgrimage to the White House in a bid to persuade the US president to change his mind on a host of issues, from his opposition to the Paris climate accord, to withdrawal from the Iran deal, to his protectionist move to impose import tariffs. All these interventions have ultimately failed, despite displays of bonhomie from the President.

European leaders – and their voters – are becoming increasingly frustrated and affronted by Mr Trump’s decisions to push on with unilateral decisions, in defiance of the wishes of US allies. The growing divide between the United States and its long-standing allies has been accompanied by Mr Trump’s apparent eagerness to align himself with more authoritarian regimes, such as North Korea and Russia.

The two-day G7 summit was overshadowed by Mr Trump’s call for Russia to be readmitted to the group. The G8 countries – including the United States – expelled Russia from the club of advanced industrial leaders over Russia’s illegal annexation of Crimea in 2014. Mr Trump’s suggestion that Russia should be readmitted, delivered as he left Washington for Quebec, was deliberately incendiary, a defiant signal that America was willing to part from its allies on key issues.

Significantly, Mr Trump also praised the new populist leader of Italy – the only leader to back the US call for Russia to be readmitted to the group.

“Just met the new Prime Minister of Italy, @GiuseppeConteIT, a really great guy. He will be honored in Washington, at the White House shortly. He will do a great job - the people of Italy got it right!”

As he disembarks in Singapore, Donald Trump is likely to have left the acrimony of the past two days behind as he prepares to engage in what he hopes will be the defining foreign policy achievement of his presidency. That the US president is more comfortable meeting the leader of a long term adversary and known dictator than America’s long-term allies says everything about the priorities and instincts of the 45th president of the United States.