Paris Letter: Macron and the strange quality of optimism 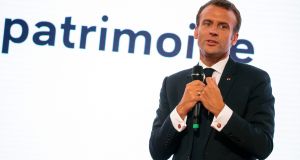 As bureau chief for British magazine the Economist, Sophie Pedder got to know Emmanuel Macron earlier than most Macron-watchers. She first interviewed him in 2012, when he was economic adviser to then president François Hollande, and continued to talk to him after he became minister for the economy in 2014. She has interviewed him twice since he became president, and is probably the foreign journalist who knows him best.

In the autumn of 2015, when Macron was still a cabinet minister, Pedder accompanied him from London to Paris on a small government jet, so she could interview him on the flight. They flew into a violent storm. “The plane was lurching around. I was clenching the seat handles and watching the lightning through the windows,” Pedder recalls. “Macron was absolutely unfazed by it. He continued talking the whole way through. I honestly wondered if he even noticed the storm was taking place. It told me a lot about his character. Subsequently, a lot of people talked about his unflappable nature.”

A radio commentator said that ‘Under Macron, the French have resigned themselves to being optimistic'

Pedder’s book, Revolution Francaise – Emmanuel Macron and the Quest to Reinvent a Nation, will be published by Bloomsbury on June 14th. Its portrayal of France is far more upbeat than her previous book, French Denial – the Last Spoiled Children in Europe, published in Paris in 2012. “Then, I was accused of French-bashing,” Pedder laughs. Now she fears being accused of over-optimism.

Macron is an atypical Frenchman. A passage in Pedder’s book recounts France’s past embrace of melancholy as part of its identity. “When Macron came along with all this optimism, it sat very uneasily with that national character,” she says. “[The novelist] Michel Houellebecq said Macron was imposing a medical cure of optimism on the French. A radio commentator said that ‘Under Macron, the French have resigned themselves to being optimistic,’ as if that required particular effort.”

Macron, Pedder says, “believes very strongly” in optimism. “He believes it philosophically and I think it’s part of his character. He believes it is possible to create a better society.”

Macron’s critics reproach him for wanting to be a “Jupiterian” president. “The French don’t like personal arrogance. That’s the greatest risk of his presidency, if he doesn’t find a way to temper or deal with that perception. The French are a rebellious people.”

When Pedder last interviewed Macron at the Élysée Palace, she asked if he had made any mistakes. To her surprise, he regretted having called strikers “lazy” and alluding to “those who are nothing” in railway stations. The remarks were taken for condescension, which was not how he meant them.

Where are strong partners to stand up for the world trading system, for international rules, for multilateralism, for all the things he believes in?

Contrary to his public image, Pedder says, Macron is capable of self-criticism. She sees the influence of Paul Ricoeur, the Christian philosopher who Macron worked with. “Testing your hypotheses against reality, that’s what Ricoeur taught him. He is constantly putting his presidency through the microscope and scanning it and checking it and taking a look at it . . . He is constantly testing his own ability to exercise power in the way he thinks is efficient and in the interest of the nation.”

Domestically, Macron’s adversaries are all but vanquished. The far-left leader Jean-Luc Mélenchon mobilised only 38,900 people in Paris for his “popular tide” on May 26th. The far left had hoped to “converge struggles” as students and workers did in the May 1968 revolution. “It doesn’t seem to have taken hold,” Pedder observes. Public opinion regarding the ongoing rail strike has taken the opposite trajectory to the 1995 transport strikes, with 64 per cent now supporting the government .

In his first year as president, Macron “has grown into the office”, Pedder says. “One wasn’t sure he would be able to hold his own among world leaders.” Macron dared to criticise Donald Trump’s policies before Republicans in his April 25th address to the joint houses of Congress. “This guy is gutsier than a lot of people realised before he became president. He’s tougher than a lot of people thought. He can be very ruthless when he wants to be.”

In Europe and the world, Pedder continues, “One of Macron’s problems is who does he work with? Who are his partners? Angela Merkel is constrained by her party. Theresa May is distracted by Brexit. Italy is facing its own crisis. Where are strong partners to stand up for the world trading system, for international rules, for multilateralism, for all the things he believes in? He can’t do it by himself. It’s a bigger problem than just Europe. He is very isolated.”