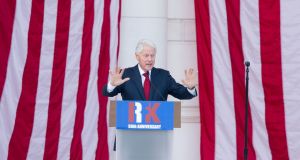 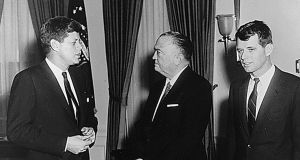 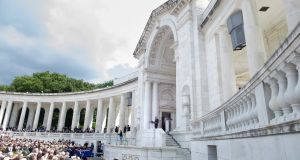 Almost 50 years after he made the journey to his final resting place, friends and family of Robert F Kennedy travelled to Arlington Cemetery on Wednesday morning to honour the life and legacy of the former US senator and attorney general.

Under the hot summer sun, hundreds of people gathered in the open-air neoclassical amphitheatre which stands among the white graves that snake through the 600-acre site just across the river from Washington DC.

Since the 1860s, servicemen and women have been buried at Arlington. Following the death of John F Kennedy in 1963, his wife Jacqueline chose to bury the second World War veteran in the national cemetery rather than in his home state, as is typically the custom. Four and a half years later, when his younger brother Robert was assassinated at the age of 42, he was laid to rest beside his late sibling.

On Wednesday, before the ceremony, the family held a private ceremony at the Kennedy family grave – the youngest Kennedy brother Edward Kennedy was interred here in 2009, as was Jacqueline Kennedy.

Bobby Kennedy’s widow Ethel, now 90, and Kennedys from across the generations, including eldest daughter Kathleen Kennedy Townsend, were among those in attendance.

But for the hundreds of people who had gathered for the official memorial service, the hour-long public ceremony was an opportunity to remember the life and legacy of a man who continues to speak to current generations and the state of modern America.

Anchored in the future

Wednesday’s event was about remembering a man who passed away 50 years ago, but the tone of the ceremony was firmly anchored in the future.

As Fr Matt Malone, the Jesuit priest who delivered the opening invocation, put it: “We are gathered here in a spirit not of mourning, but of hope.”

The African-American, American University Gospel Choir sang This Little Light of Mine, while members of the public wandered in and out of the marble amphitheatre. Many who had not been born when Robert Kennedy was assassinated stopped to listen.

Among those who spoke were Congressman Joe Kennedy III, the eldest grandson of Robert Kennedy, who noted his grandfather’s ability to connect with people from different backgrounds and to represent a “country who accepts you for who you are”.

Looking out at the crowd, the 37-year-old congressman said the scene before him was a “measure of a life well-lived – people, a human connection, the touch, that moment between strangers and friends which looks behind colour, creed and class to recognise a humanity we all share”.

Former US president Bill Clinton, who also spoke at the late senator’s memorial event 25 years ago, returned to Arlington on Wednesday to pay tribute to the former Democratic presidential candidate, who was shot by Sirhan Sirhan, a Palestinian, just hours after clinching the nomination for the California primary on June 5th, 1968.

But while he praised a politician who “went places most leaders never visited, and spoke the simple truth most leaders never speak”, his message was for the future generation of social activists and politicians as he urged the crowd “to advance the work he could not finish”.

One of the biggest standing ovations of the day was for Emma Gonzales, a survivor of the Parkland school massacre in Florida in February, who has become an advocate for gun control.

Kennedy’s assassination in 1968, barely two months after the murder of Martin Luther King jnr, brought the issue of gun control into the political spotlight – a fight that still continues today. “She and her generation are the first people who have made sensible, sane gun laws a voting issue,” said Clinton to loud applause.

Kennedy’s Irish roots were referenced during the ceremony. Ireland’s ambassador to the United States, Dan Mulhall, read a quote from the senator’s speech in Addis Ababa in 1966, in which he spoke of the “equality and brotherhood of man” and of how all people need to seek common solutions in this “small, vulnerable, infinitely interdependent planet”.

Clinton highlighted the importance of both Kennedy’s Irish heritage and his own. “The Kennedy clan was clearly of an Irish tribe,” he said.

As the ceremony drew to a close and the dignitaries went to the residence of the Irish Ambassador for a lunch reception, the mood was one of invigorated optimism.

As civil rights icon and congressman John Lewis said, quoting Kennedy: “What we need in the United States is not division, is not hatred, but love and wisdom and compassion toward one another . . . towards those who still suffer within our country.” Never have those words rung more true than in today’s America.