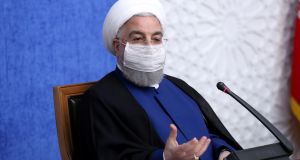 The Trump administration has dispatched an envoy to Israel and the Gulf to prepare for the imposition of weekly rounds of sanctions on Iran ahead of US president-elect Joe Biden’s inauguration on January 20th.

After briefing Israeli prime minister Binyamin Netanyahu and other senior Israeli cabinet members on the initiative, envoy Elliott Abrams said the US had in place the “maximum pressure sanctions programme”.

This is, however, a highly political plan for sanctions connected to Iran’s ballistic missile programme, Iranian involvement with Shia militias in Iraq and Hizbullah in Lebanon, and human rights abuses.

Abrams has moved on to Saudi Arabia and the Emirates for discussions ahead of a visit by secretary of state Mike Pompeo, an anti-Iran hawk. The rulers of these countries will have to consider their position carefully as they face four years of a Biden administration that seeks to re-engage with Tehran.

US President Donald Trump’s aim is to make it as difficult as possible for Biden to return to the 2015 agreement that limits Iran’s nuclear programme in exchange for lifting international sanctions.

Both Biden and vice-president-elect Kamala Harris have pledged to resume US compliance with the deal in return for Iranian compliance. Once this is accomplished, they seek to negotiate on other contentious issues.

“We urgently need to change course,” Biden has written, describing the Trump administration’s Iran policy as a “dangerous failure”. He said he would offer Tehran “a credible path back to diplomacy”.

Trump administration policy has prompted Iran to exceed limits set on its stockpile of low enriched uranium and alienated the other five signatories of the nuclear deal – Britain, France, Germany, Russia and China. The Europeans have pledged to aid Biden in his effort to return to the deal and overcome the harsh sanctions regime.

It targets not only Iran itself but also foreign governments, firms and individuals seeking to invest in and do business with Iran and its allies Syria and Lebanon.

Iran has reacted positively to Biden’s victory. President Hassan Rouhani said an opportunity had come up “for the next US administration to compensate for past mistakes and return to the path of complying with international agreements through respect for international norms”.

He said the Trump policy “was doomed to fail” and argued that Iran “considers constructive engagement with the world as a strategy”.

Trump pulled out of the nuclear deal and systematically reimposed sanctions in May 2018. A subsequent sharp fall in oil exports caused Iran’s economy to shrink. Its currency was devalued, inflation surged, unemployment soared, and millions of Iranians slipped into poverty even before coronavirus ravaged the populace.

Iran’s hardliners made a comeback in February’s parliamentary elections, weakening moderates led by Rouhani, whose term ends in June. This gives the Biden administration six months to secure US re-entry to the nuclear deal and some sanctions relief. If a hardliner is elected president, Tehran would be unlikely to take the “path” offered by Biden.