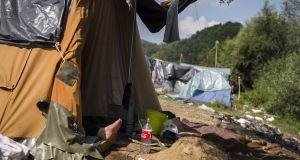 The refugee camp in Velika Kladusa, in August. On Monday, about 200 migrants walked from Velika Kladusa to the frontier with Croatia to protest. Photograph: Attila Husejnow/SOPA Images/LightRocket via Getty Images

Bosnia is now facing a “perfect storm” in its struggle to cope with thousands of migrants, as a surge in the number of new arrivals coincides with growing frustration among local residents and the approach of the harsh Balkan winter.

Dozens of migrants camped at Bosnia’s border with Croatia on Monday night to demand entry to the EU state, as about 1,000 people in the nearby town of Bihac protested against the authorities’ handling of an increasingly fraught situation.

About 4,000 migrants are now believed to be in Bosnia, with the vast majority gathered in Bihac and neighbouring Velika Kladusa, from where they try to cross the thickly wooded Croatian frontier en route to western Europe.

Bosnia has registered the arrival of about 20,000 refugees and migrants from the Middle East, Central Asia and North Africa this year – compared to just 755 last year – as they seek new ways into the EU around tightly controlled borders.

Aid groups say Bosnians have shown great generosity towards the migrants, but concern and impatience are rising in the northwest Una-Sana canton as residents demand to know where officials plan to house the travellers over winter.

The authorities’ response to the issue has been complicated by recent national elections and the fractious nature of politics in Bosnia, which is still deeply divided along ethnic lines after its 1992-95 war.

On Monday, about 200 migrants walked from Velika Kladusa to the frontier with Croatia to protest, before returning to their squalid camp in a field on the edge of the town, while another group of about 80 migrants walked from Bihac to different border crossing, where they spent the night and much of Tuesday.

Bosnian police said both protests were peaceful, and the second group was reportedly expected to return to Bihac on Tuesday evening.

About 1,000 residents of the town demonstrated on Monday for the third night running, to demand that officials find ways to reduce the large number of migrants in its streets and parks.

“It is a sign that we need to get the accommodation situation under control urgently, otherwise it will get out of hand,” said Peter Van der Auweraert, representative of the UN’s International Organisation for Migration (IOM) in Bosnia.

He told The Irish Times that Bosnia registered the arrival of a record 1,290 migrants last week, and warned that worse weather “will affect the exit route earlier than the entry route, which would mean a rapid increase of stranded migrants” in the country.

“The problem in Velika Kladusa is very clear . . . in that if people are sleeping outside they will start breaking into houses and trying to sleep in shopping malls, not because they are criminals but because they want to stay warm,” he said.

Additional accommodation is most urgently needed for hundreds of migrants living in a field in the town, which floods easily in heavy rain, washing raw sewage into the makeshift camp.

“It’s not humane at the moment and it’s going to get worse,” said Mr Van der Auweraert.