Trump pledges to begin ‘cutting off’ aid over migrant caravan

US president warns Guatemala, Honduras and El Salvador as thousands head for border 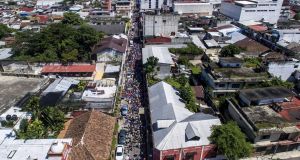 Honduran migrants heading in a caravan to the US, in Tapachula, Chiapas state, Mexico. Photograph: Pedro Pardo/AFP/Getty Images

US president Donald Trump has said America will begin “cutting off, or substantially reducing” aid to three Central American nations over a migrant caravan heading to the US southern border.

Mr Trump tweeted: “Guatemala, Honduras and El Salvador were not able to do the job of stopping people from leaving their country and coming illegally to the U.S.”

Mr Trump has raised alarm over a group of thousands of migrants travelling through Mexico to the US, saying: “Sadly, it looks like Mexico’s Police and Military are unable to stop the Caravan.”

The tweets marked the latest escalation by the US president, who is seeking to re-inject immigration politics into the national conversation in the closing weeks of the US midterm elections.

Guatemala, Honduras and El Salvador were not able to do the job of stopping people from leaving their country and coming illegally to the U.S. We will now begin cutting off, or substantially reducing, the massive foreign aid routinely given to them.

On a three-day campaign visit to western states last week, Mr Trump raised alarm over thousands of migrants travelling through Mexico to the US and threatened to seal off the Mexican border if they are not stopped.

UN spokesman Farhan Haq said it is estimated that the caravan includes more than 7,000 people, “many of whom intend to continue the march north” toward the US.

At least 5,000 migrants, mostly Honduran, massed late on Sunday in the Mexican city of Tapachula near the Guatemalan border, local police said. About another 1,000 migrants were walking toward them from Ciudad Hidalgo further south, according to a Reuters witness. Most of the migrants are expected to stay in Tapachula through Monday, according to Mexican police at the scene. Police in riot gear shadowed the caravan’s arrival along a southern highway but did not impede the migrants’ journey.

Since Mr Trump became president last year, the US has already moved to sharply decrease aid to Central America. In 2016, the US provided some $131.2 million in aid to Guatemala, $98.3 million to Honduras, and $67.9 million to El Salvador, according to official US data. By next year, those sums were projected to fall to $69.4 million for Guatemala, $65.8 million for Honduras, and $45.7 million in the case of El Salvador.

Combined, the cuts amount to a reduction of almost 40 per cent for the three nations. Mr Trump was not specific about how much more he wanted to cut the aid. – AP/Reuters