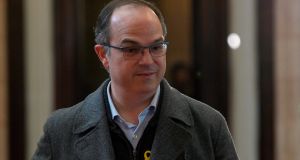 Jordi Turull, from Carles Puigdemont’s Together for Catalonia (JxCat) coalition, is expected to be the presidential candidate. Photograph: Luis Gene/AFP/Getty Images

Three months after a tightly fought regional election, Catalonia has taken a step closer to voting in a new secessionist president, following the withdrawal of jailed candidate Jordi Sànchez. However, the success of the independence camp’s bid to form a new government could hinge on both judicial decisions and political developments.

On Wednesday, the speaker of the Catalan parliament, Roger Torrent, announced that Mr Sànchez was no longer putting himself forward for the presidential post. The speaker will now seek another candidate and although he had been expected to schedule an investiture vote for early next week, it could take place as soon as Thursday, in light of judicial pressures.

The choice of Mr Sànchez as candidate was controversial, given that he is in prison awaiting trial for sedition, rebellion and misuse of public funds due to his role in a failed drive for Catalan independence last autumn. The supreme court effectively thwarted Mr Sànchez’s bid to become Catalan leader earlier this month, refusing to grant him leave to attend his own investiture vote.

After pro-independence parties narrowly won December’s Catalan election, ousted president Carles Puigdemont was the first-choice candidate. However the judiciary deemed him ineligible, on the grounds that he is in self-imposed exile in Belgium, avoiding Spain’s judiciary.

Mr Torrent is discussing the selection of a new candidate and he said he expects that process to lead to the “definitive unblocking” of the current impasse.

Since October, the Spanish government has been using article 155 of the constitution to implement direct rule in Catalonia. “It’s time to recover our institutions, to lift article 155,” Mr Torrent said.

If he were able to lead a new regional administration, the Spanish government would in theory suspend direct rule. That in turn could ensure that prime minister Mariano Rajoy gained the crucial support of the Basque Nationalist Party (PNV), which staunchly opposes the use of article 155, to approve his 2018 budget in the Spanish parliament.

Mr Turull would be a less provocative candidate than his predecessors, from Madrid’s point of view, given that he is neither in jail nor in exile.

However, he is being investigated for rebellion and on Friday the supreme court will decide if he and five other pro-independence politicians should remain at liberty.

If no candidate is successful, a new election will be held.

In Spain’s congress on Wednesday, Mr Rajoy said he hoped “a clean candidate” would emerge in order to end the stalemate. Under questioning, the prime minister also defended the behaviour of the police during last October’s outlawed independence referendum, when baton-wielding officers injured many Catalans. He told the chamber that the police had been responsible for “no gratuitous violence” that day.

1 Irish tourists excluded from visiting Greece and Croatia
2 Taoiseach has confirmed schools will reopen at the end of August
3 Quarantine will cease within fortnight, Ryanair CEO claims
4 Garda to scale down Covid-19 enforcement for June bank holiday
5 Covid-19: Pupils may be kept apart in groups and pods when schools reopen
Real news has value SUBSCRIBE