Safety meeting discussed the crack but concluded the bridge, which later collapsed leaving six dead, was not compromised 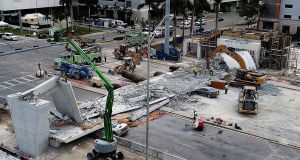 Recovery operations continue Saturday, March 17, 2018, at the site of the Florida International University-Sweetwater University bridge in the Miami area that collapsed during construction earlier in the week. Photograph: Pedro Portal/Miami Herald via AP

Hours before a pedestrian bridge at Florida International University collapsed on Thursday, killing six people, engineers met the construction manager, state transportation officials and university representatives to discuss a crack on the structure.

The Miami-based university detailed the two-hour meeting in a statement released early on Saturday.

It said the session included a technical presentation by Figg Bridge Engineers that “concluded there were no safety concerns and the crack did not compromise the structural integrity of the bridge”.

The meeting ended at 11am. Three hours later, the bridge fell.

The Florida department of transportation (FDOT) announcement late on Friday that an engineer hired by the university left a voicemail message with the state agency two days before the collapse, seeking to draw attention to the crack.

In the call, which was not picked up until after collapse and has been released to the public, engineer W Denney Pate mentioned “some cracking that’s been observed on the north end” of the bridge but said he did not think it was a safety issue.

The state transportation department also said one of its consultants attended a meeting with the FIU bridge team hours before the collapse. It did not say the crack in the bridge had been discussed.

The National Transportation Safety Board chief investigator, Robert Accetta, said on Friday it was too soon to tell if cracks played a role in the bridge collapse.

“I would have to say that a crack in the bridge does not necessarily mean it’s unsafe,” he said.

University officials have said engineers had performed stress tests to determine the “resiliency of the concrete” in the bridge.

While police believed all victims had been accounted for, they nevertheless said the search and rescue was continuing.

One victim’s uncle raged against what he called the “complete incompetence” and “colossal failure” that allowed people to drive on the six-lane highway beneath the unfinished concrete span.

“Why they had to build this monstrosity in the first place to get children across the street?” said Joe Smitha, whose niece, Alexa Duran, was crushed. “Then they decided to stress test this bridge while traffic was running underneath it?”

Authorities have not released Duran’s name, but her family has said she died. The FIU freshman was studying political science.

In an emailed statement on Saturday night, Florida International University president, Mark Rosenberg, said it would hold a moment’s silence for the victims at 1:47pm on Monday - the same time that the bridge went down. – Guardian