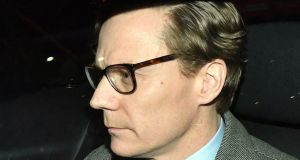 Alexander Nix, who was suspended on Tuesday night as chief executive of Cambridge Analytica, boasted about offering bribes to smear clients’ political opponents and using “beautiful Ukrainian women” to entrap them. Photograph: PA

Elizabeth Denham ordered Facebook to halt an audit the social media giant had launched into the British firm, adding that it was essential that her team should gain swift access.

“We are seeking a warrant so as the regulator we can go in and get to the bottom, search the servers, do a data audit, and by Facebook going in at this point we’re concerned about the integrity of our investigation,” she told the BBC.

“We’re looking at Facebook at the same time, so our advice to Facebook was to back away, let us as the regulator get in there and do the work, and they have agreed.”

Damian Collins, the chairman of a parliamentary committee which has called on Mark Zuckerberg to give evidence about the data breach, questioned why Facebook had sent its own investigators into Cambridge Analytica’s offices.

“We were told this last night and I don’t think the information commissioner was aware of that at that time. This is a matter for the authorities. Facebook sent in data analysts and lawyers who they appointed; what they intended to do there, who knows?” he said.

“The concern would have been, were they removing information or evidence which could have been vital to the investigation? It’s right they stood down but it’s astonishing they were there in the first place.”

Cambridge Analytica said on Tuesday that it had been co-operating with the information commissioner for more than a year but demanded that it should agree “the scope of the inspection” before Ms Denham’s team could enter its offices.

The Observer reported on Sunday that Aleksandr Kogan, a Cambridge academic, obtained the data of 50 million Facebook users by offering personality tests and sold the data to Cambridge Analytica.

Cambridge University said on Tuesday that it had asked Facebook for information about Dr Kogan’s actions, stressing that the university has no connection with Cambridge Analytica.

“We are aware that Dr Kogan established his own commercial enterprise, Global Science Research (GSR). We have previously sought and received assurances from Dr Kogan that no university data, resources or facilities were used as the basis for his work with GSR or the company’s subsequent work with any other party,” the university said.

“The University of Cambridge takes matters of research integrity and data protection extremely seriously. We have, to date, found no evidence to contradict Dr Kogan’s previous assurances. Nevertheless, we are writing to Facebook to request all relevant evidence in their possession.”

Alexander Nix, who was suspended on Tuesday night as chief executive, boasted about offering bribes to smear clients’ political opponents and using “beautiful Ukrainian women” to entrap them.

In Ireland, the Data Protection Commissioner is “following up” with Facebook Ireland on issues relating to oversight of third parties who access its users’ data, following reports of alleged misuse of personal data by behavioural targeting firm Cambridge Analytica in the US.

In its first formal statement since reports at the weekend about the harvesting of the personal data of tens of millions of people in 2014, the commissioner said the issues reported by The Observer/The Guardian in relation to profiling of Facebook users affected substantially US Facebook users.

Speaking in Berlin on Tuesday, Taoiseach Leo Varadkar sidestepped a question about how serious he viewed a Facebook data loophole left open for at least three years by the Irish Data Protection Commissioner (DPC) and allegedly exploited by Cambridge Analytica and its clients.

Mr Varadkar said the loophole had been closed in 2015 and noted the Government had since boosted resources at the DPC.

“I am confident that we have robust data protection in place,” he said.

“But don’t think we can be in any way complacent about the risks that are posed by people interfering in our elections and referendums,” he said.

Mr Varadkar said that, although there was no evidence of anyone interfering in Irish elections or referendums, there was a risk that any future referendum on Europe, for instance, might be interfered with.