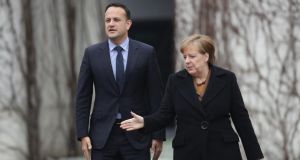 “‘Ireland can count on us – and that isn’t based on any other conditions,’ German chancellor Angela Merkel said after meeting Taoiseach Leo Varadkar and it would be hard to devise a more unambiguous message of support.” Photograph: Sean Gallup/Getty Images

The prospects for a soft Brexit have improved significantly as a result of the deal struck this week between the British government and the European Commission opening the way for substantive talks on future trade arrangements.

That is good news for Ireland, North and South, and could ultimately make all the agonising of the past 18 months over the prospect of a hard border seem like a bad dream.

The leaders of the 27 remaining European Union countries who meet in Brussels today and tomorrow are expected to sign off on the arrangement which includes a commitment for a backstop arrangement to deal with the Border if all else fails.

The Government has come in for some criticism at home for not insisting on a definitive legal text to underpin the backstop before trade talks proceed but it acted wisely by not throwing a spanner in the works.

The bottom line is that this country, more than any other EU state, needs the best possible trade deal between the EU and the UK to emerge from the talks. Attempting the use the Border this week to block progress on the wider issues would have risked a serious own goal.

The report from the Economic and Social Research Institute published yesterday shows the devastating consequences for this country of a hard Brexit with a forecast that such an outcome would cost the average household up to €1,400 a year.

Most of that cost would come from the imposition of barriers on trade between Ireland and the UK. Avoiding such disruptive barriers to trade between the two countries is every bit as crucial for the people of this country as avoiding a hard border on the island.

There now appears to be a reasonable chance that the EU and the UK will be able to strike a mutually acceptable deal on trade which will make a backstop arrangement on the Border redundant.

Only a few months ago that appeared out of the question as the Tory right, egged on by large elements of the British media, denounced any attempt at compromise as a sell-out.

How things have changed with the British now agreeing to a range of elements including a substantial exit bill, transition arrangements on trade and reciprocal rights for citizens which were supposedly out of the question.

Since the conclusion of phase one of the talks in December the atmosphere has steadily improved. This has mainly been because the British have moved to accept reality but the sober tone and tactics adopted by the EU chief negotiator Michel Barnier have also been crucial.

Both sides now say they are committed to ending up with no tariffs on trade in goods. How that is going to be achieved is the big question but the strength of the EU has always been its ability to find compromise where none seemed possible.

There is even a chance that the British government’s commitment to leave the customs union could be undone when the House of Commons gets around to voting on a Labour Party amendment on the issue in the next couple of months.

If that happens Theresa May will have the option of calling an election, which is likely to go very badly for her, or announcing that she has no choice but to accept the will of parliament and negotiate accordingly.

One of the encouraging developments of the past week is that the bellicose baying of the Tory right and its cheerleaders in the British media have been largely stilled. They won’t stay silent for ever but their influence may be on the wane.

If the worst does actually come to the worst and the trade talks ultimately fail, Ireland will have support from the commission and the other member states for its stance on the Border. “Ireland can count on us – and that isn’t based on any other conditions . . . That’s valid in itself,” German chancellor Angela Merkel said on Tuesday after meeting Taoiseach Leo Varadkar and it would be hard to devise a more unambiguous message of support.

Hopefully, it will not come to that as a serious row over the Border has the capacity to sour relations even more between the two communities in the North and between the two parts of the island.

The Democratic Unionist Party (DUP) and Sinn Féin have each sought to exploit Brexit and the Border for political gain regardless of the consequences.

While it is understandable that the DUP should resist any special arrangement for Northern Ireland which would detach it from the rest of the UK its support for a hard Brexit makes no sense.

Such an outcome would inflict severe hardship on the people who vote for the DUP as well as everybody else on the island of Ireland. In a rational world the DUP would use its influence at Westminster to support the softest possible Brexit.

Sinn Féin’s attempt to use the crisis to promote its united Ireland agenda is equally misguided and has already fostered suspicion and misunderstanding. Another reason why a soft Brexit is so important.