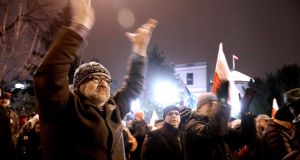 People take part in a demonstration organised by Polish Committee for the Defence of Democracy (KOD) in front of the Sejm (Parliament) in Warsaw, Poland, on Saturday. The rules proposed by Sejm Speaker Marek Kuchcinski limit the number of journalists allowed in the Sejm building. The rules are due to take effect in 2017. Photograph: Tomasz Gzell/EPA

Around two dozen members of Poland’s main opposition party extended their sit-in protest in parliament on Sunday after talks to resolve a dispute over proposed restrictions on media access failed to produce an agreement.

New rules for journalists in parliament put forward by the ruling Law and Justice (PiS) party have led to the biggest political standoff in years in the European Union state, with protests spreading across the country on Saturday.

President Andrzej Duda was planning talks on Sunday to try to defuse the row, while powerful PiS leader Jaroslaw Kaczynski also intervened to try to broker a resolution.

PiS has tightened its grip on state media and the legal system since coming to power a year ago and been criticised by Western allies over plans to reform the highest court which its opponents say is an attempt to contravene democratic standards.

Kaczynski ordered a meeting between the speaker of the upper house of parliament and about a dozen media representatives at short notice late on Saturday.

After the meeting, speaker Stanislaw Karczewski said that a consensus was reached to meet again on Monday and discuss concrete proposals.

“No one has ever wanted to limit journalists’ access to important political events,” PAP news agency cited Karczewski as saying after the meeting.

Members of the opposition Civic Platform (PO) began their protest on Friday, blocking the plenary hall podium ahead of a budget vote.

A small group of protesters held an overnight vigil in front of parliament until Sunday morning, with another demonstration scheduled in defence of the constitutional court later in the day and a pro-government rally afterwards.

Prime Minister Beata Szydlo has said the protest was just whining by parties that lost an election in 2015 after eight years in government.

However, there were signs of a more conciliatory approach from her office on Sunday.

“It might be necessary ... to admit that our politicians have inadequately communicated the proposed changes to the journalists, to our society and the opposition used this as a pretext,” Pawe Szefernaker, the secretary of state in the Chancellery of the Prime Minister, told the Radio ZET station.