Thousands trapped in Aleppo as transport fails to arrive 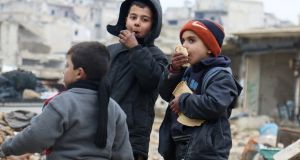 Boys eat bread as they wait to be evacuated from a rebel-held sector of eastern Aleppo. Photograph: Abdalrhman Ismail/Reuters

The remains of besieged Aleppo are a freezing, desperate chaos, with tens of thousands of hungry, frightened people waiting long hours for spaces on buses they fear may never depart, aid workers and trapped civilians have said.

“By bus, by car, by walking, even crawling, we are ready to leave by any way, we just want to get out,“ said a 26-year-old medical technician Ahmad Abo Dyab, after a day of waiting for space on a bus before the evacuation system collapsed on Friday. “We have given up on our homes, our belongings, everything: now we only want to get out.“

The International Committee of the Red Cross (ICRC) said it hoped to resume the evacuation of civilians and wounded on Sunday after a faltering ceasefire deal was patched up on Saturday. There were hopes the evacuation could have continued on Saturday, but as afternoon stretched into evening there was no sign that vehicles were on their way, leaving tens of thousands facing another cold, hungry night under siege.

Only 8,000 people had made it out when rebel fighters broke terms of the ceasefire, and the buses out were abruptly stopped. There were also reports that forces loyal to the Syrian president, Bashar al-Assad, had detained and robbed some people trying to leave, before sending them back.

It is unclear exactly how many civilians are still trapped in the ruins of opposition-held areas, after tens of thousands fled into government-held Aleppo to escape a final intense wave of bombing.

The UN has said there are still up to 30,000 people, including women and children, trying to leave east Aleppo. Many have abandoned their homes to stay near the crossing point in a desperate bid to get a seat on one of the buses.

“Each one can only take 50 people, and there are tens of thousands of us,“ said Abo Dyab. His family left the abandoned apartment where they had found temporary lodging at around 4am for a walk in the pre-dawn gloom to an evacuation point.

“It was so cold, the ground was a muddy mess, people were slipping, falling into puddles, losing their luggage, even their families,“ he said. “The situation was so miserable, it was like doomsday.“

The ICRC, which has been coordinating the evacuation, called for more urgency from all parties to the conflict. “People are expecting us to continue the evacuation. It‘s important that the parties on the ground do their utmost to end this limbo,“ said the head of the ICRC in Syria, Marianne Gasser, who is in west Aleppo. “Please come to an agreement and help save thousands of lives.“

Some of those trapped inside fear the bombing will soon restart, after Russia‘s defence ministry said that all civilians had been evacuated and only fighters remained in the city.

“To justify our elimination, even your governments will say we are terrorists. Don‘t believe them and be angry for our blood,“ teacher and activist Abdulkafi al-Hamdo wrote on Twitter before sharing a picture of his infant daughter playing inside a suitcase. “My daughter is in the bag, do you think she is a radical?“ he asked.

People who have already endured months of intense bombardment are on edge, and on Friday an outburst of of gunfire at the main crossing point had scattered a panicked crowd in seconds, Abo Dyab said. “People started to run, like they were mad. They lost their luggage, their money. I heard that more than one person lost their child in the confusion,“ he added.

“One woman even left her baby and ran away. Imagine that, the horror of the situation, and the shooting was so close, she left behind her infant baby. After that she went back to look for her daughter, but I don‘t know if she found her.“

It was clear the evacuation effort had collapsed so they trudged back to the apartment where they were staying, 10 hours after they had left. The place was offered by a friend after their own home came under government control a few days earlier, and although they are grateful for the kindness, they have no heating and little to eat.

“We are lying under blankets and praying for rescue,“ he said. “I wish God would get us out of this horrible situation, people here want to die a hundred times a day.“

The slow pace of evacuation on buses is another fear for those in the city. With so many wanting to leave, there are fears the processing could take longer than any ceasefire deal can hold. In the first hours of the ceasefire some people were reportedly allowed to leave in private cars, but this has now been stopped.

“I am very worried that my family and I won‘t be able to get out, it is a miserable situation,“ said 21-year-old aid worker Abo Yazan, who asked for a pseudonym to be used. “Some friends got out, they managed to leave early because their car was working. It took a while to get our cars going.“

He tried to leave with his wife, baby son and a group of other relatives and friends who crammed into two cars. One refused to start, and by the time they had rigged up a make-shift tow rope to drag the stricken car to the crossing point, they were too late.

“When we got there they said no private cars were allowed, we had to take the buses. So we took the cars away, went to get the buses, then they told us there is no chance of leaving at all.“

Even if they do get onto the buses, most people evacuating from the city will do it with a heavy heart. Defeat for rebel factions there has been crushing, and Assad is known for pursuing and punishing opponents, so they are unlikely to be able to return.

The slow bus journey through its ruined streets may be the last glimpse they have of their hometown. “Leaving Aleppo is terrible, I feel I am never going to be able to return to this city,“ said Abo Yazan. “Humanity has lost the battle.“

The chaos surrounding the evacuation reflects the complexity of Syria’s civil war, with an array of groups and foreign interests involved on all sides. The United Nations Security Council is due to vote Sunday on a French-drafted resolution aimed at ensuring that UN officials can monitor evacuations from

Aleppo and the protection of civilians who remain. The draft text also “emphasises that the evacuations of civilians must be voluntary and to final destinations of their choice, and protection must be provided to all civilians who choose or who have been forced to be evacuated and those who opt to remain in their homes.”

A vote has been scheduled for Sunday morning, diplomats said. It was not immediately clear how Russia would vote on the French drafted UN resolution. Before the draft was circulated to the council, Russian UN Ambassador Vitaly Churkin said on Friday: “If it is a sensible initiative and we see it on paper, why not entertain this initiative?” Russia, an ally of Damascus that has provided military backing to Assad’s troops, has vetoed six Security Council resolutions on Syria since the conflict started in 2011. China joined Moscow in vetoing five resolutions.