Philippines’ Duterte: ‘Bye-bye America’ and we don’t need your money 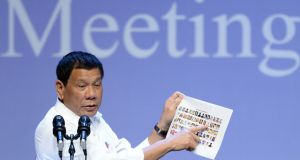 Philippine president Rodrigo Duterte told the United States on Saturday to prepare for repeal of an agreement on deployment of troops and equipment for exercises, declaring that America’s money could be replaced.

Duterte, however, suggested relations could improve under president-elect Donald Trump. “I like your mouth, it’s like mine, yes Mr President. We are similar and people with the same feathers flock together.”

But returning his focus to the present US administration, which has criticised Duterte over reports of extra-judicial killings in his campaign against drugs, he delivered a different message.

“We do not need you,” Duterte said in a news conference after arriving from visits to Cambodia and Singapore. “Prepare to leave the Philippines. Prepare for the eventual repeal or abrogation of the VFA. ”

The Visiting Forces Agreement, signed in 1998, accorded legal status to thousands of US troops who were rotated in the country for military exercises and humanitarian assistance operations.

“Bye, bye America and work on the protocols that will eventually move you out of the Philippines,” he said, adding that his decision would come “any day soon” after reviewing another military deal, Enhanced Defence Cooperation Agreement.

A US State Department spokesman, Justin Higgins, said officials had seen Duterte’s statements, but the United States had “not received any official requests from Philippine officials to alter any of our many issues of bilateral cooperation.”

Duterte was visibly upset and vented his anger on Washington because of a decision by the board of the Millennium Challenge Corp, a US poverty reduction agency, to defer a vote on the re-selection of Manila for compact development due to human rights issues.

“We do not need the money. China said they will provide so many,” he said. “The politics here in Southeast Asia is changing.”