Negotiations ongoing over evacuation of Aleppo

Thousands of cold, scared and injured people are still in east Aleppo waiting to leave 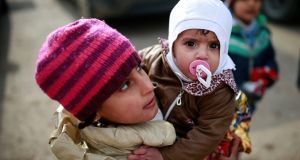 Syrian children wait for other members of their family after they crossed into Turkey at the Cilvegozu border gate with Syria, near Hatay on Saturday. Photograph: Emrah Gurel/AP Photo 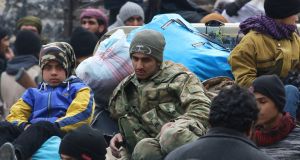 Rebel fighters and civilians gather as they wait to be evacuated from a rebel-held sector of eastern Aleppo. Photograph: Abdalrhman Ismail/Reuters 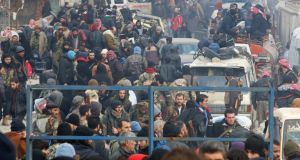 A new deal has been reached to evacuate thousands of civilians still trapped in rebel-held areas. Photograph: Abdalrhman Ismail/Reuters 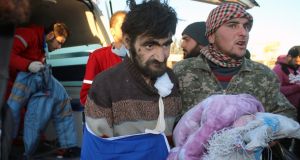 The evacuation of eastern Aleppo stalled on Friday after an eruption of gunfire. Photograph: Thiqa News/AP 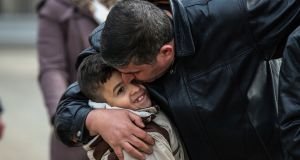 Syrian Ali, last name not given, who currently resides in Turkey, embraces his son Zein from Idlib, Syria, after he crossed into Turkey at the Cilvegozu border gate with Syria on Saturday. Photograph: Emrah Gurel/AP Photo

A new deal is being negotiated to complete the evacuation of rebel-held areas of Syria’s east Aleppo which ground to a halt on Friday after demands from pro-government forces that people also be moved out of two villages besieged by insurgents.

A Syrian rebel official and a government official said early on Saturday the evacuation of Aleppo would resume and the two Shia villages would be evacuated, as well as the wounded from two towns near the Lebanese border and east Aleppo.

But sources said negotiations between pro-government and opposition forces, plus their international backers, were still going on to finalise how the evacuations would take place and how many people would leave.

A senior Syrian rebel official from the powerful Ahrar al Sham group involved in the talks said the deal was being held up by Iran and its allied Shia militias who were insisting people be allowed to leave the two besieged Shia villages of Kefraya and al-Foua before letting the Aleppo evacuation happen.

“Iran and its sectarian proxies are using the humanitarian situation of our people in besieged Aleppo and preventing civilians from leaving until the evacuation of their groups in al-Foua and Kefyra,” Munir Sayal, the head of the political wing of the movement, told Reuters in a telephone interview.

As darkness fell on Saturday afternoon and temperatures began to fall below freezing there was no sign the evacuation was happening. A resident in Aleppo told Reuters that nobody had left the rebel-held enclave and no buses had entered. He said he had heard gunfire near where people were supposed to wait for buses.

The International Committee of the Red Cross (ICRC) said thousands of cold, scared and injured people were still in east Aleppo waiting to leave. It said it had received some indications that a deal would be reached soon.

The towns of Madaya and Zabadani are blockaded by pro-government forces.

The operation to evacuate fighters and civilians from the last opposition-held area of Aleppo was suspended on Friday, its second day, after pro-government militias demanded that wounded people also be brought out of al-Foua and Kefraya, and protesters blocked a convoy on the road out of Aleppo.

The chaos surrounding the evacuation reflects the complexity of Syria’s civil war, with an array of groups and foreign interests involved on all sides.

Aleppo had been divided between government and rebel areas in the nearly six-year-old war, but a lightning advance by the Syrian army and its allies that began in mid-November after months of intense air strikes deprived the insurgents of most of their territory in a matter of weeks.

Numerous activists, rebels and east Aleppo residents shared reports and videos of people fleeing the sound of shooting, being detained and returning home badly beaten and robbed of their possessions near a checkpoint as they tried to leave the city on Friday.

Rebels said the previous evacuation deal was breached by pro-government militias who detained “hundreds” of people trying to leave, leading to some deaths. A Syrian military source denied this, but said a convoy trying to leave was sent back.

“Now we are working on international guarantees to guarantee the safety of those who leave Aleppo so that such violations are not repeated,” Syrian rebel official al-Farouk Abu Bakr told news channel al-Arabiya al-Hadath from Aleppo on Saturday.

An activist and teacher inside rebel-held Aleppo, Wissam Zarqa, told journalists via a messaging app that he spent Friday in the cold with his family hoping to leave. He said he did not feel safe trying to flee Aleppo after hearing about the attack on the convoy.

The Syrian Arab Red Crescent (SARC) and the ICRC said guarantees were needed to protect people.

“We’re ready to resume facilitating the evacuation according to our humanitarian mandate. But we now expect all the parties on the ground to provide us with solid guarantees in order to keep the operation going,” said Marianne Gasser, head of the ICRC in Syria.

But the Syrian Observatory for Human Rights, which monitors the war, said no buses or ambulances had entered al-Foua or Kefraya, where it says there are around 20,000 people, of whom roughly 4,500 are pro-government fighters.

The Observatory said 8,000 people, including some 3,000 fighters and more than 300 wounded, left Aleppo in convoys of buses and ambulances in the evacuations that began on Thursday morning.

Rebel officials say the numbers evacuated are much lower, with no fighters having left.

The UN says around 30,000 people remain in rebel-held Aleppo, of whom a number would be taken to Idlib province, which is mostly controlled by hardline Islamist groups, and the rest would go to government-held city districts.

Idlib is already a target for Syrian and Russian air strikes but it is unclear whether the government will push for a ground assault or simply seek to contain rebels there for now.

Turkey has said Aleppo evacuees could also be housed in a camp to be constructed near the Turkish border to the north.

Syrian state media reported on Saturday that a number of fighters south of Damascus had surrendered their weapons to the state in the towns of Zakiya and al-Deirkheyba as part of local truces.