UN Council to vote on UN monitoring of evacuations on Monday

Video uploaded to social media purports to show civilians evacuating eastern Aleppo as gunfire is heard during a negotiated ceasefire to allow people out of the city's remaining opposition-held areas. Video: REUTERS 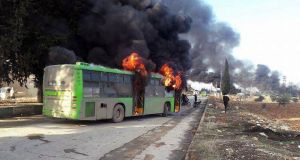 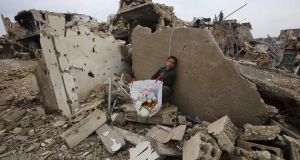 A Syrian boy sits with belongings he collected from the rubble of his house in Aleppo’s Al-Arkoub neighbourhood, after pro-government forces retook the area from rebel fighters. Photograph: Youssef Karwashan/AFP/Getty Images 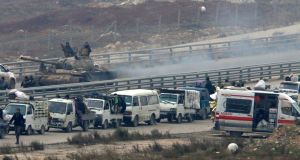 Forces loyal to Syria’s president Bashar al-Assad sit on a tank as a convoy of buses and other vehicles bringing people out of eastern Aleppo turns back in the direction of the besieged rebel enclave on Saturday. Photograph: Reuters 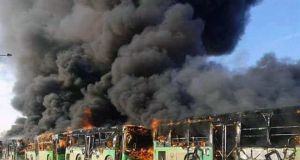 The Syrian Observatory for Human Rights said on Sunday the evacuation of the besieged villages of al-Foua and Kefraya had been postponed for an unknown period of time, a move likely to also postpone the evacuation of east Aleppo.

The war monitor said no evacuees left east Aleppo or the villages on Sunday.

There have been conflicting reports about the evacuations over the weekend.

Earlier it was reported that a number of buses containing fighters from east Aleppo and their families left the last rebel-held sector of the Syrian city on Sunday after a deal between rebels and pro-government forces allowed evacuations to resume.

The United Nations Security Council agreed a compromise draft resolution on UN monitoring of evacuations from Aleppo and will vote on Monday, diplomats said.

“We expect to vote unanimously for this text tomorrow at 9am. (2pm Irish time)” US Ambassador to the United Nations, Samantha Power, told reporters after more than three hours of negotiations.

The UN Ambassador for Russia Vitaly Churkin, an ally of the Syrian government in the civil war, told reporters: “I think we have a good text, we agreed to vote tomorrow morning.”

The Aleppo evacuation ground to a halt on Friday after a disagreement over the villages of al-Foua and Kefraya.

Five buses on their way to the villages were attacked and burned, the Syrian Observatory for Human Rights and Syrian state media said.

State television showed pictures of flames coming from the green buses which have come to be synonymous with evacuations in Syria.

Videos broadcast on social media showed men with guns cheering and shouting “God is great” as the buses burned.

State media said “armed terrorists”, a term it uses for groups fighting against President Bashar al-Assad’s rule, carried out the attack. Pro-Damascus Mayadeen television said the rebel group formerly known as the Nusra Front was behind the attack.

Aleppo had been divided between government and rebel areas in the nearly six-year-long war, but a lightning advance by the Syrian army and its allies began in mid-November following months of intense air strikes, forcing the insurgents out of most of the rebel-held territory within a matter of weeks.