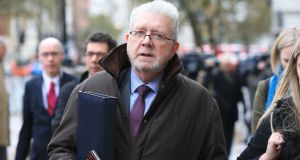 Scotland’s Brexit Minister Mike Russell who has insisted there is an “overriding obligation” on Theresa May’s government to consider proposals that could keep the UK and Scotland in Europe’s single market. Photograph: Jonathan Brady/PA Wire

Scotland will publish proposals this week for how it can remain in the European single market after Britain leaves the European Union in order to avoid the “national disaster” of a “hard Brexit”, the Scottish government said on Sunday.

British prime minister Theresa May has said she will trigger Article 50 of the Lisbon Treaty, the formal process of leaving the EU, by the end of March to kick off two years of exit talks.

However, her plans for those negotiations have been shrouded in secrecy and businesses and investors fear Britain might seek a “hard Brexit” where controlling immigration takes priority over access to the European single market.

While the United Kingdom as a whole voted to leave the EU in the June 23 referendum, Scotland strongly backed remaining in the bloc.

The country’s devolved nationalist government has said it wants to stay part of the EU when the rest of the UK leaves, and on Tuesday will put forward plans for remaining in the 500 million-consumer single market should that prove impossible.

“In line with our commitments to explore all options to protect Scotland’s interests, we will set out compromise proposals which, while not conferring the full benefits of EU membership, would mitigate the Brexit damage,” said Michael Russell, the Scottish government’s minister for EU negotiations.

“At the heart of our plan is a framework to keep Scotland’s place in the European Single Market.”

Mr Russell said such a plan faced “complexities” but a “hard Brexit” threatened 80,000 Scottish jobs over a decade.

“That would be a national disaster for Scotland,” he said. “Brexit presents everyone with an unprecedented challenge, and with political goodwill on all sides and a willingness to cooperate, these proposals can effect a solution for Scotland.”

The plans also will outline further “substantial” new powers that should be handed to the devolved parliament in Edinburgh post-Brexit.

May has promised to work with the devolved Scottish, Welsh and Northern Irish governments to achieve a unified negotiating strategy for Brexit, which risks straining the centuries-old union between England and Scotland.

Scots rejected secession in a 2014 referendum but the ruling Scottish National Party has warned it might hold a second independence vote.

“Our intention now is that these proposals can be discussed and agreed in a UK context and then form part of the UK government’s overall negotiating position when Article 50 is triggered,” Mr Russell said.