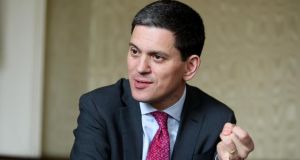 International Rescue Committee president David Miliband: “Ireland can build its pride by saying: ‘We’re part of this world, not separate from it.’” Photograph: Maxwell Photography

Ireland must focus on the immigrant contribution to Irish society in order to avoid dehumanising those affected by the refugee crisis, former British foreign secretary David Miliband has said.

The debate around the ongoing refugee crisis in Europe and US president Donald Trump’s aggressive stance on immigration is leading to “humanitarian chaos” and dividing families across the globe, said Mr Miliband, who is president of the International Rescue Committee.

He said the State’s response would provide a clear commentary on what we stand for as a nation and what we believe in.

“The truth about countries that are locking their doors and building walls is that it’s a political commentary on them. Ireland is regaining its confidence, it’s building its economy and can build its pride by saying: ‘We’re part of this world, not separate from it,’” Mr Miliband said.

“I don’t often quote Joseph Stalin but he once said that one person’s death is a tragedy and a million people’s deaths is a statistic. The danger is that 25 million refugees will just become statistics. What I’ve learned from all my political experience and my NGO experience is that we have to humanise this challenge.”

Mr Miliband was in Dublin on Thursday to meet officials from the Department of Foreign Affairs to discuss Ireland’s partnership with the committee and its work in Nigeria, Yemen, South Sudan and Cameroon with particular focus on the rights of women and girls.

The committee, which provides support to people affected by humanitarian crises overseas and runs refugee resettlement programmes in the US, has expressed deep concern at the repercussions of Mr Trump’s executive order which seeks to halt refugee resettlement.

The US admitted 85,000 refugees last year, while nearly half of the more than 12,000 Syrian refugees resettled were children under the age of 14.

Mr Miliband said Mr Trump’s crackdown on immigration had been a propaganda win for Islamic State, also known as Isis.

“There is also a geopolitical point to this. When you ban refugees from seven Muslim countries it’s a gift to Isis to then go around the Middle East and say: ‘Look, America hates Muslims.’”

Mr Miliband commended the Government for standing by its commitments to support the world’s poorest people but advised officials to continue to provide clear information on the numbers of refugees arriving on our shores.

A total of 320 asylum seekers have been relocated to the State from Greece since the Tánaiste committed to taking in 4,000 people before the end of 2017. An additional 561 people have been resettled from Jordan and Lebanon with another 121 people due to arrive in the next month.

1 Lucky to be alive - Cousins rescued at sea after clinging to a lobster pot for 15 hours
2 Housing activists assist tenants to re-enter property following eviction
3 Covid-19: Taxi drivers, plumbers and carpenters among self-employed to get new €1,000 grant
4 Donald Trump indulges false ‘birther’ theories about Kamala Harris
5 Where are they now? The mixed fortunes of gang linked to Det Garda Donohoe killing
Real news has value SUBSCRIBE