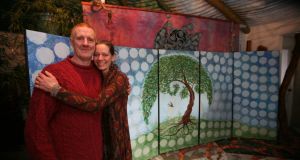 Artists Maria Fleming and Paul Cole put the finishing touches to the Ballaghaderreen welcome wall: interpreters will be available at Duffy’s Supervalu to translate messages into Arabic. Photograph: Brian Farrell

The people of Ballaghaderreen are building a “welcome wall” in advance of the arrival of over 80 Syrian refugees to the Co Roscommon town early next month.

They hope the wall will serve as a salve to the anti-immigrant sentiment associated with US president Donald Trump’s promise to build a wall between along his country’s border with Mexico.

The five-panel art installation will be on display in a local supermarket in the town on Saturday, when hundreds of locals are expected to drop in and write welcome messages for the Syrian families.

Interpreters will be available at Duffy’s Supervalu shop throughout the day, to translate the messages into Arabic for those wishing to do so.

The wall, which was designed by local artist Maria Fleming, will then be moved to the foyer of the emergency reception and orientation centre at the former Abbeyfield hotel, which is expected to be home for the group of Syrian families for up to six months.

The back of the wall will be left blank to permit the Syrian refugees to write their own messages to the local community if they so wish.

Debbie Beirne, one of the co-ordinators of the Welcome to Roscommon movement, said the wall is a way for local people to extend their goodwill to the Syrian people arriving in their community.

“When you look at what is going on all over the world, especially with President Trump and his plans for a wall, this is a small town in the west of Ireland doing the exact opposite,” she said. “This is a community turning that notion of wall-building on in its head.”

The Welcome to Roscommon movement was formed following the announcement by the Department of Justice on January 6th that 82 Syrian refugees, mostly with young families, would be accommodated in Ballaghaderreen.

The first group of Syrians who are to live in Ballaghaderreen flew into Ireland on Tuesday evening. They are currently staying at the Baleskin reception centre in North Dublin where they have access to an on site HSE medical centre.

Another cohort is due to arrive early next week. They will move to Ballaghaderreen “in phases in early March”.

The welcome wall is just one of a number of projects being organised by the community in advance of the arrival of the refugees, 37 of whom are children.

A play area is being built by outdoor education students at Galway Mayo Institute of Technology while a collaboration involving the Irish Fairy Door company, graphic designers Roomthree and local volunteers are putting together an indoor play area at the centre.

1 Des Bishop apologises to Traveller community for comments in interview
2 One hundred Irish retailers for all your online Christmas shopping
3 A further three deaths and 1,167 new Covid-19 cases reported in the Republic
4 Martin only told of contact tracing problem when texted Irish Times story
5 Traffic light system for Covid detection to operate at Irish airports in November
Real news has value SUBSCRIBE