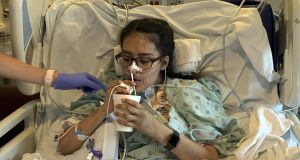 Mayra Ramirez after her surgery. She was not told she’d had a lung transplant until several days after she woke up. ‘I couldn’t process it,’ she says. Photograph: The New York Times

The last thing that Mayra Ramirez remembers from the emergency room at Northwestern Memorial Hospital in Chicago is calling her family to say she had Covid-19, was about to be put on a ventilator and needed her mother to make medical decisions for her.

The 28-year-old did not wake up for more than six weeks. And then she learned that on June 5th, she had become the first Covid patient in the United States to receive a double-lung transplant.

Last Wednesday, she went home from the hospital.

Ramirez is one of a small but growing number of patients whose lungs have been destroyed by coronavirus and whose only hope of survival is a lung transplant. “I’m pretty sure that if I had been at another centre, they would have just ended care and let me die,” she said a few days ago.

Her surgeon, Dr Ankit Bharat, performed a similar operation on a second Covid-19 patient, a 62-year-old man, on July 5th. The surgery is considered a desperate measure reserved for people with fatal, irreversible lung damage. Doctors do not want to remove a person’s lungs if there is any chance they will heal. Patients must be sick enough to need a transplant and yet also strong enough to survive the operation, recover and get back on their feet. With a new disease such as Covid-19, doctors are still learning how to strike that balance. “It’s such a paradigm change,” Bharat said. “Lung transplant has not been considered a treatment option for an infectious disease, so people need to get a little bit more of a comfort level with it.”

In some cases, Bharat said, hospitals appeared to have waited too long to recommend a transplant. One patient being referred to his centre seemed like a good candidate but then had major bleeding into the lungs as well as kidney failure, and the surgery was no longer feasible. “I think people need to recognise this option earlier and just start at least talking about it before it gets to that point,” Bharat said.

Before she became ill, Ramirez, a paralegal for a law firm specialising in immigration, was working from home and having her groceries delivered. She was in good health but had an autoimmune condition, neuromyelitis optica, and took medication that suppressed her immune system and might have made her more vulnerable to the coronavirus infection.

She was ill for about two weeks and consulted with a Covid hotline about her symptoms. At one point, she headed to the hospital, but then turned back without going in. She dreaded the idea of being admitted and told herself she would recover.

But April 26th, her temperature reached 105 degrees, and she was so weak that she fell when she tried to walk. A friend drove her to the hospital. When doctors told her that she needed a ventilator, she had no idea what they meant. She thought it meant some kind of fan, like the word in Spanish. “I thought I’d just be there for a couple of days, max, and get back to my normal life,” she said.

But she spent six weeks on the ventilator and also needed a machine to provide oxygen directly into her bloodstream.

“The entire time, I had nightmares,” she said. Many of the nightmares involved drowning, her family saying goodbye, and doctors telling her she was going to die.

The disease was relentless. Bacterial infections set in, scarring her lungs and eating holes in them. The lung damage caused circulatory problems that began to take a toll on her liver and heart.

The doctors told her family in North Carolina that it might be time to come to Chicago to say goodbye, and her mother and two sisters made the trip.

But Ramirez held on, cleared the coronavirus from her body and was placed on the transplant list. Two days later, on June 5th, she underwent a 10-hour operation.

It wasn’t until weeks later that I could be grateful, and think there was a family out there who had lost someone

She woke scarred, bruised, desperately thirsty and unable to speak, “with all these tubes coming out of me, and I just couldn’t recognise my own body.”

The nurses asked if she knew the date. She guessed early May. It was the middle of June.

She was not told she’d had a lung transplant until several days after she woke up. “I couldn’t process it,” she said. “I was just struggling to breathe, and I was thirsty. It wasn’t until weeks later that I could be grateful, and think there was a family out there who had lost someone.”

Before her illness, she worked full-time and enjoyed running and playing with her two small, scrappy dogs. Now she still feels short of breath, can walk only a short distance and needs help to shower and stand up from a chair. The dogs were overjoyed at her homecoming, but their energy was a bit much. Her mother, who lives in North Carolina, took time away from her job at a meatpacking plant and travelled to Chicago to help her recover.

Ramirez says she’s learning to use her new lungs and getting stronger every day. She is looking forward to getting back to work, but she still has a way to go. Her family is assisting her, and a friend started a GoFundMe page to help pay the bills.

“I definitely feel like I have a purpose,” Ramirez said. “It may be to help other people going through the same situation that I am, maybe even just sharing my story and helping young people realise that if this happened to me, it could happen to them, and to protect themselves and protect others around them who are more vulnerable. And to motivate and help other centres around the world to realize that lung transplantation is an option for terminally ill Covid patients.”

The outlook for Ramirez is good, Dr Bharat said, because she is young and healthy. She will be on anti-rejection medicines for the rest of her life. Transplanted lungs can still be rejected, he said, but he has seen some last 20 years. And patients may be able to receive a second transplant.

“I think from now on she’ll continue to get stronger and stronger,” he said. “She asked if she could go sky diving. We’ll probably get her there in a few months.” – New York Times